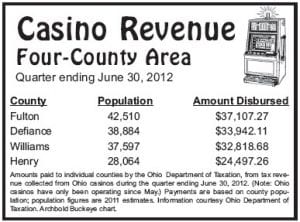 Fulton County is receiving money from casinos operating in Ohio.

But the amount will not offset the loss of state revenuesharing funds state officials are taking away from Fulton County, said Vond Hall, Fulton County administrator.

Hall said when all the state cuts of money going to local governments go into effect, Fulton County will lose about $1 million in revenue per year.

“Casino revenue will not be $1 million,” he said.

Casinos were first approved by Ohio voters in 2009. The first two, located in Toledo and Cleveland, went into operation in May.

Subtracted from that amount is whatever the casino pays out in winnings.

Casino operators must pay the tax every day.

The money goes to Columbus, where it accumulates in the Ohio Casino Tax Revenue Fund.

After each quarter, money is taken from the fund and distributed to several other funds.

In the county fund, the money is distributed to each of Ohio’s 88 counties, based on population. If there is a city with a population of more than 80,000 in a county, the city gets half the county money.

In the county student fund, money is distributed to school districts, based on the number of students.

Fulton County received its first payout from the casino county funds in July.

Cuyahoga County, with more than 1.27 million people, plus the extra revenue for hosting a casino, got the biggest payout at $554,424.51.

School districts across the state won’t receive their first payment from casino revenues until January 2013.

The total amount paid to counties in July was more than $7.7 million.

In July, total payments to the Ohio Casino Tax Revenue Fund were more than $19.7 million.