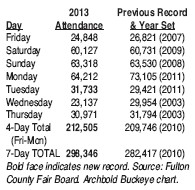 A new seven-day total attendance record was recorded, with 298,346 persons entering the fairgrounds.

Dennis Wyse, Fulton County Fair Board president, said the board was very pleased with the results.

“The guys worked on it all year long, and we knew the weather was going to be cooperative. That’s a huge part of it,” Wyse said.

“When you’ve got high humidity or rain, that holds ‘em back.”

Wyse said they were expecting good attendance, as other county fairs were reporting good numbers.

Also, groups that rent the Fulton County Fairgrounds in the off-season were experiencing good crowds.

He speculated that families are skipping big annual vacations, deciding instead to take in events closer to home.

In addition to good attendance, Wyse said the board “got the perspective that people spent more money” at the fair than they had in the recent past.

While the financial results may not be ready next month, “We’re encouraged. Vendors said their percentages were up. We could tell they were very satisfied,” he said.

The grandstand shows did well. The Sunday night rock music and Monday night country music concerts were sold out.

“It was the first time ever the Sunday and Monday shows sold out (the grandstand seats) back-to-back,” he said.

There was still some space available in standing room on the track between the grandstand and the stage for the Sunday night show.

“We turned people away.”

Also, the Thursday night demolition derby sold out for the second year in a row.

“We were pleased with the way it turned out,” he said.