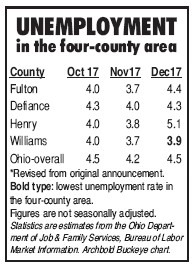 Fulton County finished 2017 with a 4.4% unemployment rate in December, the Ohio Department of Job and Family Services announced recently.

That’s a seven-tenths (0.7) of a percentage point increase from the November figure of 3.7%, the lowest rate recorded in nine years and one month.

In 2017, unemployment in Fulton County ranged from a high of 6.2% in February to the low in November. Unemployment was 5% or below for eight of 12 months.

Fulton County was in a five-way tie for the 51sthighest rate in Ohio. Other counties with 4.4% unemployment were Lake, Montgomery, Hardin, and Knox.

During December, unemployment ranged from a high of 8.8% in Monroe County, in southeast Ohio, to a low of 2.8% in Mercer County in west-central Ohio.

Mercer County has had a lock on the lowest rate title throughout 2017. The highest rate in that county was 3.9%, in January.

Monroe County had the highest rate eight out of 12 months. The highest was 11.8% in February.

All county data is not seasonable adjusted. The unadjusted rates for Ohio as a whole and the nation were 4.5% and 3.9%, respectively.

When seasonal adjustments are applied, the Ohio rate became 4.7%; the national rate, 4.1%.

During December, there were 257,600 unemployed workers in Ohio. Ohio had about 5.47 million workers employed, for a total labor force of more than 5.72 million.