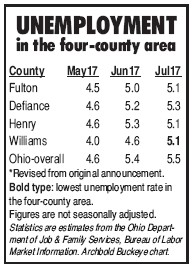 Three counties– Fulton, Henry, and Williams– had unemployment rates of 5.1%, the first time in recent memory all three had the same rate.

The Ohio Department of Job & Family Services announced the estimated unemployment rates for all of the 88 counties in Ohio for July.

The Defiance County rate was 5.3%.

The Fulton County rate increased one tenth (.1) of a percentage point between June and July. Unemployment has been increasing since April, when the rate bottomed out for 2017 at 4.4%.

ODJFS estimated there were 900 people out of work and seeking a job in the county during July. There were 21,600 people employed in the county, for a total labor force of 22,800.

Trumbull County, in far northeast Ohio on the Pennsylvania border, had the highest rate in the state, at 8.7%.

It is the first time in recent memory Trumbull County has held the highest rate title.

All county unemployment data is not seasonally adjusted. Unadjusted rates for Ohio and the nation were 5.5% and 4.6%, respectively.

When seasonal adjustments are applied, Ohio was 5.2%, with the national rate at 4.3%.

During July, there were more than 322,300 Ohioans unemployed. With just over 5.2 million working, the total labor force in Ohio was more than 5.8 million.