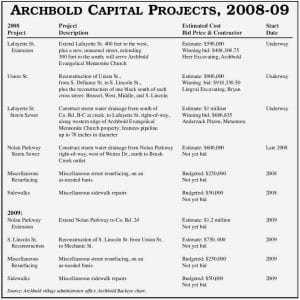 But village officials said last week plans change so much, they’re only really comfortable talking about two years: this year, and 2009.

“There’s nothing set in stone. It’s a working plan; it changes all the time,” said Dennis Howell, Archbold village administrator.

Jim Wyse, Archbold mayor, said the priorities of road building and street reconstruction change based on economics, available funds, even the political situation.

“We’ll have a lot better handle on our finances at the end of 2009. We’ll see what the downturn has done to our income tax collections,” he said.

Archbold pays for its street building and reconstruction out of revenue collected by the municipal income tax.

About $69.6 million went into capital improvements.

This year the village will reconstruct Union Street, from South Defiance Street to South Lincoln Street.

The contract is approved, and work is underway.

Wyse said some citizens questioned if it was done for Sauder Woodworking.

Wyse said when Archbold voters approved an increase in the municipal income tax, they were promised that some of the money would go toward reconstruction of streets in the southeast quadrant.

Wyse said work started at West Barre Road, and has been moving north a block at a time.

Howell said some of the underground utilities in the neighborhood, the infrastructure, are the oldest in the village.

He said some of the water lines in the area date back to the original water system, which was built in 1916.

Also on the list for this year is a 400-foot extension of Lafayette Street, plus an unnamed 300-foot street to the south that will serve the new Archbold Evangelical Mennonite Church.

Wyse said many believe the street is being expanded for the church, but that is not the case.

He said he and church offi- cials looked over the area, and he told church representatives of the village plan to expand the street. They based part of their decision on the street expansion.

The street extension is about a $408,000 project. Work on the project is underway.

Work has started on the construction of a storm sewer pipeline from a creek south of Co. Rd. B-C to the Lafayette Street right-of-way.

The project must be completed before Lafayette can be extended to Co. Rd. 24, a project slated for 2010.

Planned for late this year is another storm sewer, from the Nolan Parkway right-of-way north to an outlet at Brush Creek.

The project must be completed before Nolan Parkway can be extended to Co. Rd. 24.

The project is needed because there are 450 people who work in the industrial park, and many come from the west.

Plus, another outlet for the industrial park is needed, because making a left turn on South Defiance Street at peak traffic times is difficult.

However, neither of the in- dustrial park intersections with South Defiance Street have enough traffic to justify a traffic signal, based on Ohio Department of Transportation rules.

ODOT is involved because South Defiance Street is also St. Rt. 66 through the village.

In the southeast quadrant, South Lincoln Street will be rebuilt.

Bob Seaman, village engineer, said the original plan was to rebuild South Street in 2009, but, “the winter was tough on South Lincoln Street.”

Because of the condition of the pavement, village officials decided to reconstruct South Lincoln Street.

Howell said village council members decided to take $200,000 from the income tax collection to pay down debt on renovations at the wastewater treatment plant.

In 2010, 2011, and 2012, Wyse said village officials will focus on rebuilding and upgrading streets in the older sections of the village.

“As to the order, we’re confi- dent that’s going to change,” he said.