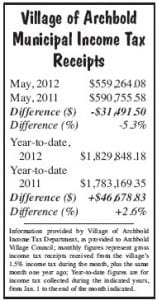 Both requests were recommended for approval by the Archbold Planning Commission.

Prior to the meeting, council held a brief public hearing on both issues. No comments were received.

The two issues were approved during the regular council meeting, which immediately followed the hearing.

As recommended by the planning commission, only electric racers will be allowed. Gasoline-engine cars are prohibited.

Also, racing will be conducted during daylight hours only.

Nemire said in order for the small tires on the racers to grip the track surface, the track must be wet, eliminating any concern over dust.

Nemire said he visited a track were there were 40 to 60 families in attendance; and often, a family has two racers. He estimated 25 to 30 families in Archbold race the radio-controlled cars.

David Deskins, school district superintendent, said the “As” will be 15 feet tall.

Grime said the logo will be bigger than the one on the Archbold water tower, but will also be higher in the air.

The nacelle of the wind turbine, where the logo will be located, will be 213 feet above the ground.

In response to a question from Kevin Eicher, councilman, Deskins said the anticipated life of the logo is 10 years, but a coating could be applied to extend its life.

The logos of other educational organizations may be applied to the turbine; those logos must also be recommended by the planning commission.

In presenting the village income tax report to council, Dennis Howell, Archbold village administrator, said receipts for May were down when compared to the same month in 2011.

However, the year-to-date collection was still up by 2.6% when compared to the same time period in 2011.– David Pugh