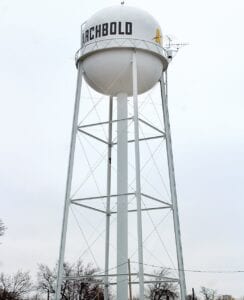 The current village water tower is located at the corner of Oak and West streets in the southeast quadrant of Archbold. It is nearing the end of its useful life, prompting the construction of a new tower. Eventually this tower will be removed, but a definite date for that work has not been set.– photo by David Pugh

After months of planning, Archbold Village Council accepted the bid of a Kentucky firm to build a new water tower for the village of Archbold.

The meeting was held in the lobby of the former Farmers & Merchants State Bank Woodland branch office.

The bank donated the building, appraised in 2020 at $277,000, to the village after bank officials determined it no longer fit the bank’s profile.

Village officials are discussing, but have not decided upon, a use for the building.

There were three bidders for the water tower project. The winning bid was 4.9% above the engineer’s estimated cost, which was $1,170,000.

Dexter Krueger, village engineer, said officials with Caldwell Tanks want a signed contract with the village as soon as possible. With a signed contract in hand, they can purchase the steel needed for the job and avoid an increase in the price of steel.

Council agreed to borrow $1.3 million for the tower from the Ohio Water Development Authority.

Donna Dettling, village administrator, said the village is borrowing the money at 0.68% interest. That, she said, makes the payments about $135,000 a year for 10 years, a figure Dettling called “very manageable.”

The village previously borrowed about $9 million for the construction of upgrades at the water treatment plant. Dettling said that money was secured with the same interest rate.

Council held second readings on adopting the new comprehensive plan for the village, and amending portions of the village zoning code.

Following a public hearing, during which there was no public participation, council approved renewal applications for farmland in the agricultural district designation for property inside the village.

Dettling said the renewals were to be completed by March 1, but paperwork from the county auditor’s office was late in arriving.

Council reviewed the capital projects fund payment status report, and the February reports from the police, fire, and street departments.