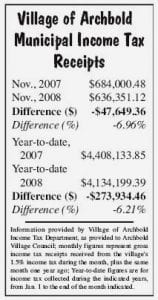 The position has been open since mid-January.

Wyse’s appointment required that council grant a residency waiver, since he lives in Ridgeville Corners.

Department heads and assistants are required to live within the village limits unless a residency waiver is granted. A waiver may be granted based on the recommendations of the village administrator and department head and is subject to council approval.

Council has granted residency waivers two other times in the last 10 to 12 years.

Prior to voting on the residency waiver, council met in executive session for about eight minutes. Martz was invited into the closed-door session.

Stated reason for the executive session was personnel matters.

The money was a “mixture of borrowed funds and funds we had put in there from revenue,” said Dennis Howell, village administrator.

“We ended up with that much more than we actually needed under the contract.

“It will be left in investments, and then when the note comes due in July, if the fund is still healthy, it will be used for debt reduction.”

Council also amended the appropriation ordinance that was set at the beginning of the year. The ordinance has an estimated spending amount for every line in the budget.

“Typically there need to be adjustments made at the end of the year so those all balance out” to what was actually spent, said Howell.

Council approved a change order on a sidewalk improvements contract, which included sidewalks along Barre Road and replacements and repairs near the Archbold Middle School. The contract was decreased $697.05 for a final contract price of $47,152.95.

The Ohio Revised Code and Ohio Environmental Protection Agency requires the plan to be updated every five years.

Ohio Gas Company informed village officials there will be no rate change in December.

All members were present, and all votes, with the exception of the approval of the Dec. 1 meeting minutes, were unanimous.

Ed Leininger, councilman, abstained from the vote, because he was absent from the meeting.