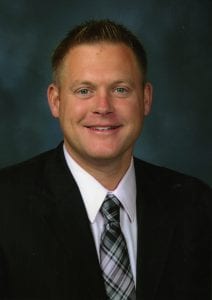 Cory Lynn Sprow of Delta passed away on Jan. 3, 2013, from injuries sustained in a car accident.
Born Oct. 11, 1974, in Bryan, Cory graduated from Edon High School.
Cory received a degree in elementary education from BGSU.
Cory joined the Pike-Delta-York school system in 1998 and found his passion.
He spent the majority of his career as a sixth grade science and health teacher. He also coached football, baseball, golf and basketball.
As head boys basketball coach for 10 years, he was twice named NWOAL Coach of the Year and in 2010 was named District 7 Coach of the Year.
Following the 2012 season, Cory gave up his head coaching job and accepted the position of elementary principal.  His time in the position was short, but his impact was great.
Cory’s family meant everything to him. He was a loving husband and the most amazing dad. Memories of the incredible life they built together will live on in the hearts of his wife Tammy (Winzeler) and their daughters Ally & Kendall.
Cory will be greatly missed by his mother, Diane (Bill) Moore; his father Kevan (Fran Stevens) Sprow; his brother Chris Sprow and his sister Kallie (Jamie) Gensler, as well as his grandparents George and Peg Sprow and numerous aunts, uncles and cousins.
Cory’s nieces and nephews Kiera and Jayden Gensler and Isaac and Will Fraker each held special places in his heart.
Cory gave tirelessly to others by mentoring, encouraging and listening. Countless students, players, friends and colleagues in the gym and in the classroom will remember his smile, his passion and his “all out, all the time” attitude.
Cory lived every day of his life to the fullest and the lessons he taught us will endure forever.
In one final act of giving, Cory became an organ donor through Life Connection of Ohio in order that other lives might be saved.
Cory joins his grandparents Lavon and Darlene Siebenaler, Phyllis Berndt and his beloved friend Koop in unending love and amazing grace.
While our earthly hearts are breaking, we know that Cory has been set free.
A celebration of Cory’s life will be held at 11 a.m., Tuesday, in the gymnasium at the Delta High School, with the Rev. Eric Markovich officiating.
Visitation will be held at Trinity Lutheran Church in Delta on Monday from 1 p.m. until 8 p.m.
The family respectfully requests that in lieu of flowers, memorial contributions be given to the Delta Panther Athletic Club or Coaches vs. Cancer.
Grisier Funeral Home in Delta has been entrusted with arrangements. www.Grisier FH.com.-Posted 1.6, 2:21 pm