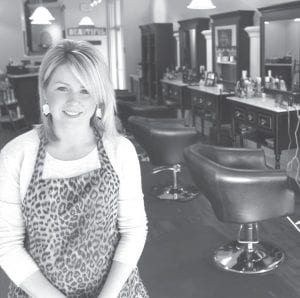 Samantha Lauber in the new location of Salon Bliss– the site of the former Carol Ann’s City Café in historic downtown Archbold. Lauber said since she was a little girl, she wanted to be a hair stylist. She has had her own salon since 2000.– photo by David Pugh

Samantha Lauber’s Salon Bliss already had a location when another opportunity presented itself.

Since 2000, the salon was located in a retail strip development in the 100 block of South Defiance Street.

Recently, she reopened Salon Bliss in the former City Drug building– also known as the site of the former Carol Ann’s City Café– at 227 North Defiance Street in downtown Archbold.

After so many years in an established location, why did she want to move?

“When it (the building) became available, I felt like… if I was going to own something in town, this was the best spot I could be,” she said.

“It’s on the corner. I’ve always loved it. So it was the only spot I wanted.”

There were other things in the building that interested her.

A lot of work was put into the building when it was converted from a drug store to a coffee shop. Plus, there was plenty of available parking and the historical feel of the place.

“I think it’s amazing that it used to be the City Drug. When I was really little, I remember coming into the City Drug,” she said.

Information from the Fulton County Auditor office available over the Internet indicates on May 1, 2018, the building was sold to Andrew Lauber Properties, LLC, rural Stryker. The selling price was $90,000.

But that’s when things just started. To turn the former coffee shop into a beauty salon, there was work to do.

“We added walls in the back, and then we made the kitchen into a break room, so that was a big deal. We had to take the oven hood down,” she said.

The light fixtures were already in place along with the large, horizontal-shaft ceiling fans.

Samantha said the new location has “a totally different vibe” from her former location.

“It was like, happy and peppy and loud,” she said.

For her new place, she wanted something more serene, calming, soothing, and peaceful.

From the time the Laubers took possession until the building became the way she wanted it took 10 months.

Samatha said she didn’t know what was invested in the transformation.

“He did all the work except the wiring and the plumbing.”

That, she said, helped with the cost.

So there they were, trying to run a business on the south side of the tracks, get a new location ready on the north side, and oh, by the way, raise four kids.

“That was crazy,” she admitted.

So, 227 North Defiance Street is where she’d like to stay?