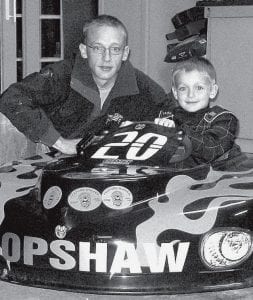 Brett Coopshaw, 6, rural Pettisville, in the driver seat of his kid kart racer, which he drove to victory in the Buckeye Nationals event Saturday, Oct. 4. With him is Tim, his father and crew chief. The round decals on the kart denote feature race wins.- courtesy photo

Brett Coopshaw, 6, rural Pettisville, won the Buckeye Nationals kid kart feature after spinning out and restarting at the back of the pack.

The event was held on the dirt track at Edon, Saturday, Oct. 4.

From the second starting position, Coopshaw took the lead on the third lap, but spun out, bringing out a caution flag.

Officials moved him to the back of the pack where he restarted the race with nine laps to go. He worked his way through the field to reclaim the lead and take the win.

The Buckeye Nationals victory is his fourth feature win at Edon.