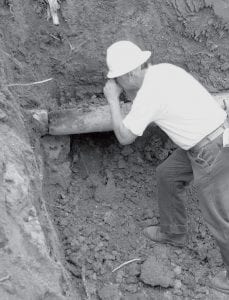 A Toledo Edison worker photographs the damaged metal conduit that carried the three phases of a 12,500-volt underground power line. The line was damaged by a backhoe from Brooks Contracting, which is rebuilding North Lincoln Street. When the cable was cut, power was lost throughout the village for about a half hour, Wednesday, Aug. 15.- photo by David Pugh

Toledo Edison officials are investigating what went wrong to allow a backhoe to cut into a 12,500-volt underground power cable about 12:45 pm, Wednesday, Aug. 15.

Bob Seaman, Archbold village engineer, said workers from Brooks Contracting, Perrysburg, cut into an underground power cable, which they thought was an abandoned waterline, just north of the intersection of North Lincoln and West Holland streets.

The work was being done as part of the North Lincoln Street reconstruction project.

One worker used a saw to cut the metal conduit that encased the three cables carrying the electricity, not the cables.

It was only when a backhoe operator tried to tear out a section of what he thought was a waterline with his machine that the cables were damaged. Reports were three loud explosions, which coincides with the three phases of the electrical line.

Gary Keys, TE area manager, said the cable was an exit cable routing a 12,500-volt primary power, from the Holland Street substation to a nearby pole, for distribution throughout the area.

Toledo Edison crews isolated the damaged cable, rerouted power through the distribution system, and restored electricity to customers in about 32 minutes, Keys said.

Keys said last week TE offi- cials were to meet with the contractor who locates underground cables to discuss the incident.

Seaman said all of his information on the case comes from Brooks Contracting.

He said Brooks officials told him the company had called the Ohio Utilities Protection Service to locate underground utilities, such as power lines.

Weeks ago, when Lingvai Excavating, Bryan, was installing waterlines as a subcontractor to Brooks, Seaman said Brooks called the locating service in, but the company could not locate the power line. Toledo Edison crews, who located the line for the Lingvai crew, were called to the scene.

Seaman said the village engineering department knew about the underground power line; it showed on their plans.

“We were aware the line was there. We knew about where it was. That’s the idea of calling the locating services. So you know where it is.”

When the worker cut into the metal pipe, water poured out. That’s not usual for an underground power conduit, Seaman said. To workers at the scene, it was more proof they were dealing with the abandoned waterl

Many of those at the scene of the power-line cut reported smelling natural gas, but it was thought to be propane from a nearby emergency generator.

Seaman said an Ohio Gas worker checked the area for natural gas leaks with a special meter, but found none.

However, Seaman said the smell of gas persisted as the day progressed. Toledo Edison wanted to do some digging to facilitate the repair, and when another Ohio Gas employee checked, a leak was discovered.

Seaman said the leak was from a natural gas pipe that served a home at the corner of West Holland and North Lincoln streets.

The gas line is on top of another metal pipe. “We do not know why that pipe is there. It’s not deep enough to be a waterline,” Seaman said.

When the primary power cable was cut, electricity apparently traveled through the unknown line and burned a hole in the metal gas line.

Since the Wednesday incident, everything has been repaired.

Seaman said he does not anticipate any action against Brooks or TE by the village.

“We’re happy no one got hurt,” Seaman said.

“It’s easy to deal with repairs and delays, rather than injured personnel.”- David Pugh