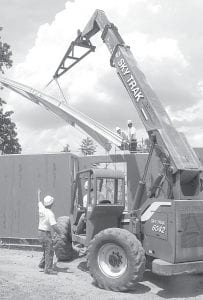 Construction workers use a crane to place roof trusses on the new 12-bed Fairlawn Haven rehabilitation center, Thursday, May 30. Tentative completion of the addition is in August.– photo by David Pugh

“By the end of the week, all of the roof trusses should be up. This should be a perfect week in terms of weather.”

Recent rains have “maybe slowed us up a week, but we’re making up time now,” he said.

The new 12-bed unit being constructed on the northeast side of the original nursing home building will be known as the Rupp Rehabilitation Neighborhood, in honor of Melinda and the late Bill Rupp.

The Bill & Melinda Rupp Foundation was the lead donor for the $5.5-million project.

The center is designed for persons who will stay at Fairlawn for a relatively short period of time as they rehabilitate from injury, illness, or other medical problems.

Part of the same project is the remodeling of the nursing home spaces within Fairlawn.

“All the rooms that currently have beds side-by-side will be all private rooms, except for two rooms we have reserved for couples,” he said.

“We will still have some rooms that will be split, but there won’t be any beds sideby side.”

The rooms in the rehabilitation area, or “neighborhood,” as Fairlawn officials now call it, will be nice-sized rooms with big windows.

“That was a must,” Ringenberg said.

“We tried to get the windows as low as possible, so someone sitting in a chair can look out.

“The whole key to this thing will be landscaping.

“This is such an exciting project.