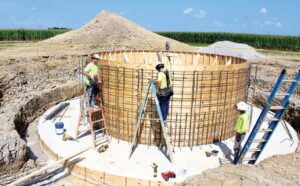 Construction workers were busy Friday, Aug. 20, building a wood structure that will become the form into which concrete is poured. It’s part of the base for the new 200,000-gallon Archbold water tower. The project is expected to be completed next July.– photo by David Pugh

The new Archbold water tower is taking shape on property on the northwest corner of the intersection of Co. Rds. D and 22.

Because water weighs a little more than eight pounds per gallon, and the new water tower will have a 200,000- gallon capacity, the new structure will have to support about 1.6 million pounds.

The concrete foundation must be strong.

Krueger said the foundation for the new tower extends 12 feet below ground.

The tower will have one central column with a bulbshaped tank on the top. Steel for the project will be prefabricated at the factory, then delivered and erected on site.

Krueger said he anticipates the steel arriving for the new water tower in late October or November.

When the steel arrives, it will be painted with a primer. 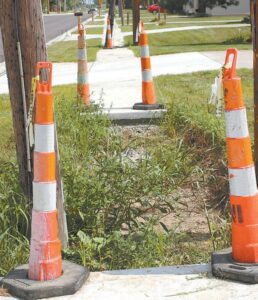 A small section of sidewalk on the south side of East Holland Street remains unfinished.– photo by Mary Huber

A final coat of paint will be applied once the tower is complete.

He anticipates the new tower will be ready for operation in July 2022.

The current water tower, located at the intersection of Oak and West streets, will be demolished, but a plan to remove that tower has not been made.

Krueger said the village can’t use both towers at the same time because the new tower will be 23 feet taller than the old one.

Because water seeks its own level, if village workers attempt to fill the new tower, water will overflow out of the old one.

The new water tower will result in an increase of about 10 pounds per square inch for village water customers. The increased pressure is not anticipated to cause problems for water customers.

The village has contracted with Caldwell Tanks, Inc., Louisville, Ky., to build the new water tower at a cost of about $1.23 million.

The reconstruction of Rosewood and Dogwood courts in the Woodland II subdivision is nearly complete.

The final completion was moved back to near the deadline date due to weather.

Also, additional work was added, mostly due to homeowners in the neighborhood who asked that new driveways be constructed, Krueger said.

Crews from the contractor, Hillabrand & Sons Construction, Northwood, are doing final touches on the project.

Construction on East Holland Street has been complete for some time. There are some loose ends with the project, particularly getting suitable grass to grow in areas that were disturbed by construction.

Jonathan Block, an engineer with the Archbold Engineering Department, said a section of sidewalk on the south side of East Holland Street remains uncompleted.

That section is waiting for CenturyLink, a telephone service provider, to move overhead cables from old telephone poles to new ones, then remove the old poles.

When that portion of the project is complete, Block said the street department will finish the sidewalk.

Vernon Nagel Construction, Napoleon, was the contractor on the job.

There were some problems with unstable soil around the station, but crews from Nagel Construction were able to cope with them.

Right now, the area around the above-ground portions of the lift station is filled with stone. After the soil and stone has had time to settle, the area will be covered with concrete.