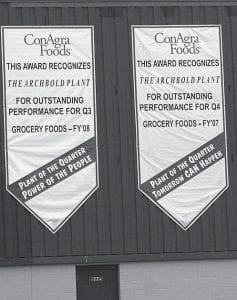 The Archbold ConAgra plant displays two banners, the most recent given to the plant for earning the title, “Grocery Plant of the Quarter.” The award honors plant workers for third quarter of fiscal year 2008. The company announced plans to close the Archbold plant in 2006, putting more than 300 out of work. Ron Corkins, local plant manager, said the ConAgra vice president presenting the award said the Archbold workforce and the entire Archbold community rallied around the Archbold plant, and company officials reversed their decision. Corkins said the company vice president referred to the effort as “power of the people.”- photo by David Pugh