ConAgra To Expand In Archbold 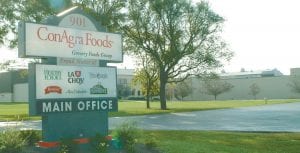 Editor’s Note: A version of this story was posted to ArchboldBuckeye.com at 5 pm Thursday, March 10, with an update at 10:17 am, Friday, March 11.

ConAgra Foods announced additional product lines will be coming to the Archbold plant, adding 100 or more new jobs to the facility.

Dan Hare, company spokesman, said the additional production will transition to the facility between the summers of 2017-2018.

“The decision to make more food in Archbold was based on a careful evaluation of our overall plant network and our ongoing efforts to operate as efficiently as possible,” Hare said in an email to this newspaper.

Dennis Howell, Archbold village administrator, said the ConAgra announcement is “fantastic news for Archbold and the four-county area. These are good paying jobs, which will certainly stimulate the local retail and service economies. We hope it will stimulate the local housing market, as well.”

A statement on the Fulton County Economic Development Corporation website said the Archbold expansion is contingent on the completion of an incentives package from the state of Ohio and local government.

Howell said ConAgra is being offered an incentive package to move new production to Archbold, “but terms are still confidential. There will be local legislation passed at some point approving it.”

“ConAgra Foods is one of the largest employers in the county and an important industry in the village of Archbold,” said the statement on the FCEDC website.

“The FCEDC is pleased the company chose the Arch- bold plant for its expansion project, which will add more than 100 jobs to the economic development corporation.”

When asked about the impact the expansion could have on Archbold, Howell said, “The expansion is likely to increase truck traffic to the facility from 150 to 300 trucks per week, which emphasizes the very real importance of transportation improvements.

“Logistics are a critical piece of every corporate decision on where to expand operations or build new facilities.”

Additionally, Howell said the expansion should increase water demand. How much is not yet known, he said.

Initially, the expansion will decrease Biological Oxygen Demand (BOD) loading, which is a measure of the strength of wastewater.

Howell said ConAgra plans to overhaul its waste pretreatment system, which should reduce grease, fats, and oils that are released to the wastewater treatment plant.

Howell said local and regional electrical and mechanical contracting firms should see a benefit as the new production lines are added.

While the Archbold plant will add production lines, Hare said in his email a second plant in Trenton, Mo. will close in 2018.

“The decision to expand in Archbold will also result in the closure of our plant in Trenton, Mo.,” said Hare.

“We’ve communicated with our employees in Trenton, and we are committed to supporting them as we phase down production and exit the facility.”

Debbie Carman, executive director of the Trenton Chamber of Commerce, said last week the news of the ConAgra decision was devastating to the town of about 6,000 residents in north-central Missouri.

Carman said the plant, which employs about 400 workers, is the largest employer in the city.

“We’re a strong community,” Carman said, “and the community will unite to bring other opportunities to Trenton.”

News of the ConAgra decision began to flow from several sources last week.

On Thursday, March 10, Trenton radio station KTTN posted an article on its website announcing ConAgra workers were informed of the pending closure the day before, Wednesday, March 9.

The same day, the FCEDC announced the ConAgra decision on its website.

The Archbold plant has its roots in Detroit in the 1920s, when a business known as La Choy, a maker of Chinese foods, began.

In 1942, the La Choy plant was taken over by the government to build rifles.

A tomato processing plant was built in Archbold with the help of German prisoners of war.

In 1950, the plant switched to Chinese foods.

On Sept. 14, 2006, ConAgra officials announced the Archbold plant would close by January 2007, but local plant employees, managers, and government officials pulled together and fought the decision.

ConAgra announced on Sept. 19, 2007, that management had reversed its decision, and the plant would remain open for the foreseeable future.–David Pugh