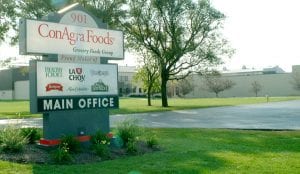 As of Thursday afternoon, March 10, few details were available, but the Fulton County Economic Development Corporation announced that ConAgra Foods will conduct a major expansion at the Archbold plant, which could add 100 jobs.

The same day, KTTN Radio of Trenton, Mo., announced on the station website that on Wednesday, March 9, ConAgra officials informed workers at a ConAgra plant in that city that the facility will be closed in 2018.

The statement from the FCEDC states, “Today (Thursday, March 10), ConAgra Foods has announced a major expansion project at their Archbold, Ohio facility in Fulton County.

“ConAgra Foods is one of the largest employers in the county and an important industry in the Village of Archbold.

“The FCEDC is pleased that the company chose the Archbold plant for this expansion project, which will add more than 100 jobs in the plant.

“This expansion is possible because the Archbold facility hosts a productive workforce that is recognized in the company for their hard work and quality.

“We congratulate all involved in this project and the employees at ConAgra plant in Archbold.”

The KTTN webpage states, “The production (at the Missouri plant) is to move to a ConAgra plant in Archbold, Ohio.

“The preliminary driver for the decision is the operational infrastructure of the Archbold plant. It is significantly more modern, and there is sufficient capacity at the plant to take on additional work; therefore, the transition will allow ConAgra to operate more efficiently.

“Labor cost was not a factor in the decision.”

The KTTN story quotes Dan Hare, a ConAgra corporate spokesman, as announcing the plant closure which will result in the loss of 395 jobs in Trenton between June 2017 and Summer, 2018.

As of about 5 pm local time, Thursday, March 10, this newspaper was unable to reach Hare for comment.-Posted 3.10, 5 pm

In an email message to this newspaper Friday morning, Dan Hare, ConAgra spokesman, said, “We informed our employees in Archbold that the company intends to transition prodcution to the facility between the summer of 2017 and the summer of 2018.

“The decision to make more food in Archbold was based on a careful evaluation of our overall plant network and our ongoing efforts to operate as efficiently as possible.

“The decision will also result in the closure of our palnt in Trenton, Mo. We’ve communicated with our employees in Trenton and we are committed to supporting them as (we) phase down production and exit the facility.”–posted 10:17 am 3/11