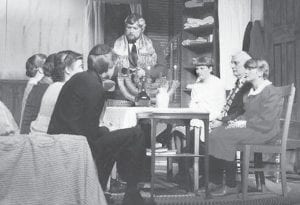 Randy Stuckey, at the head of the table, Susan Short, Charles Winzeler, founder of “Friends of the Arts,” and Jill Schnitkey appear on stage during an ACT production of “The Diary of Anne Frank.”– courtesy photo

Archbold Community Theatre has given a lot to the community.

It has presented first-rate entertainment, and provided an opportunity to those with an interest in theatre to explore the art and craft of acting.

ACT has benefited from the support of its community.

Now, ACT is asking for the community’s help with Capital Campaign 2013.

Susan Short, ACT vice president of development, said the goal of the campaign is to raise $75,000 to pay off the mortgage on its theatre building, Giffey Hall in Ridgeville Corners.

The Farmers & Merchants State bank agreed to issue a mortgage.

To make the purchase possible, six individuals, referred to in the capital campaign flyer as “six courageous individuals who believed in the arts and the benefits of live theatre in our community,” put their names on the mortgage, guaranteeing repayment.

Under the terms of the mortgage, a “balloon” payment is due in January 2014.

Short said F&M officials are willing to renegotiate the mortgage, but ACT leadership would like to pay off the mortgage once and for all.

“That way, we could use what we have been paying on the mortgage to make improvements to the building,” Short said.

He said the basement floor needs to be resurfaced, “as it is crumbling and uneven.

“The loose pieces would be removed, and it would be leveled with a filler-sealer.

“The crumbling pillars would be rebuilt or replaced.

“The downstairs furnace has been limping along for years. It needs to be replaced with a more energy-efficient model.

“We want to repaint and refinish the auditorium using molding that we have already obtained through donations.”

Also, a drainage system for the building foundation is needed.

Short said ACT also would like to replace the tables and chairs in the basement used for dinner theatre and at intermissions.

The current ones “are old. They’re heavy, and they don’t match,” Short said.

“They are things we picked up at auctions and got through donations.

“Our dream would be to add an ADA (Americans with Disabilities Act) compatible unisex restroom upstairs, and remodel the downstairs restrooms,” Van Sickle said.

“But that may take other fund-raisers down the road,” Van Sickle said.

ACT has already done a lot to the building, from adding insulation to remodeling the lobby.

Short said ACT leaders have always strived to be good stewards of their resources.

They have reused lumber and made their own lighting equipment.

ACT members clean their own building. All building maintenance is done by ACT members.

They do their own snow removal.

Short said at times, ACT has struggled financially, but after its latest production, “Shrek the Musical,” “we’re in good fiscal health,” she said.

Short said the Capital Campaign has been underway.

The money has come from ACT memberships, local businesses, and other private donations.

Short said two of the most special donations “came from two teen girls who have been in our kids shows.

“That was pretty heartfelt.”