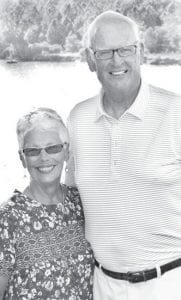 The couple will celebrate the occasion by taking a cruise in April 2018.