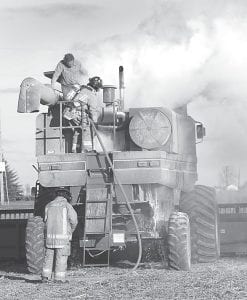 Steam rises as an Archbold firefighter sprays foam into the engine compartment of a combine owned by Doug Stuckey, rural Archbold. Firefighters were called to the intersection of Co. Rds. E and 25 about 5:21 pm, Saturday, Oct. 27. Stuckey was harvesting soybeans in a field on the southwest corner of the intersection. He tried to use fire extinguishers to put out the fire, but it took AFD units to fully quench the flames. AFD officials determined the cause of the fire was an electrical malfunction in the engine compartment. Damage was estimated at $10,000.– photo by David Pugh