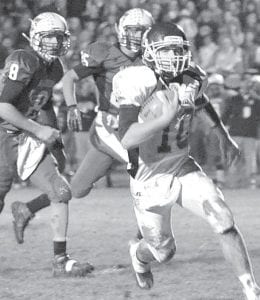 Blue Streak quarterback Evan Wyse leaves Columbia defenders in the dust and races for a 26-yard touchdown, giving AHS a 7-0 lead in the first quarter.– photo by Mario Gomez

Archbold made the long trip to Columbia Station, Saturday, Nov. 3, to face the Columbia Raiders in the first round of the Division V football playoffs.

It was a long ride home as the Raiders celebrated their first playoff victory in four tries, a 39-34 old-fashioned shootout.

“I am proud of our kids,” said Bryan Miller, AHS head coach.

“The seniors helped the program take another step forward. They are good, tough kids.

“I am disappointed that the season has to end this way, but all good things come to an end.”

The Streaks finish with an 8-3 record. Columbia (10-1) faces Patrick Henry, Saturday, Nov. 10, in a regional semifinal.

Streaks Lead 14-6 After One

Raider Stadium, nestled deep in Lorain County, suffered from the rage of Superstorm Sandy, which left a soft but playable field. 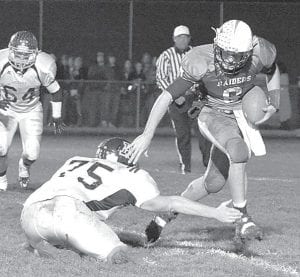 Raiders quarterback Jay Banyasz attempts to run around the outstretched arm of Archbold’s Zach Zimmerman. Banyasz ran for 281 yards and passed for 177 in Columbia’s 39-34 victory.– photo by Mario Gomez

The two squads combined for a total of 863 yards of offense. Columbia totaled 492 yards, and was led by junior quarterback Jay Banyasz rushing for 281 yards on 33 attempts and four touchdowns.

On the Archbold side junior quarterback Evan Wyse took the brunt of the ground game, rushing for three touchdowns on 24 carries and 153 yards.

The Streaks won the toss and deferred to the second half, giving Columbia the ball first in the first meeting between the schools.

Forcing a three-and-out on the first series, it looked like the soft field conditions would not affect the AHS defense, and the offense clicked right from the start.

Led by E. Wyse, the Streaks marched down the field on a five-play drive with E. Wyse scoring on a 26-yard touchdown run.

“We were very surprised that Archbold wanted to pound the ball with the quarterback they have,” said Jason Ward, CHS head coach.

“We were actually surprised at how strong that Archbold quarterback was. That caught us off guard a little bit, and we were not real good tacklers in that first half.” 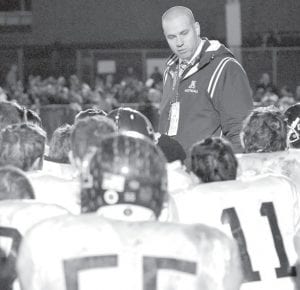 Above: Bryan Miller, AHS head coach, pulls his team together and gives them a pep talk after the season ended for the Streaks at Columbia Station. Left: Jase Grosjean listens to Miller’s words of wisdom.– photos by Mario Gomez

From there it was all of- fense on both sides.

Columbia countered with a 4-yard touchdown pass from Banyasz to Jesse Lambert.

Archbold held a 14-6 advantage after one as E. Wyse crossed the goal from 21 yards out with one second left, capping off a 12-play drive that chewed four minutes off the clock.

The roles reversed in the second quarter, with the Raiders scoring twice to Archbold’s one touchdown.

Banyasz had a 4-yard run midway through the quarter.

Archbold countered with an 11-yard run from E. Wyse.

Banyasz connected with Michael Boey for a 20-yard touchdown toss, but trailed 21-19 at the half.

Archbold got the first crack at the ball to start the second half. 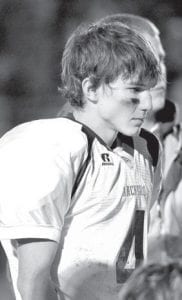 This time it was the Raider defense that stepped up.

The Streaks picked up a first down on a 13-yard run by E. Wyse, followed by a 1- yard run and an incomplete pass.

E. Wyse scampered for 6 yards, and facing fourth down, threw an incomplete pass.

Four plays later, Columbia had a lead it would not relinquish.

Banyasz ran for 8 yards, then broke a 44-yard run that took the Raiders to the Streaks’ 4-yard line.

Archbold stalled again on its next possession, and its defense had no answer for Banyasz and company. The Raiders scored on a 3-yard run by Banyasz for a comfortable 33-21 lead with 2:09 left in the third.

The Streaks were not ready to have their season come to an end. In just 22 seconds, E. Wyse hit Tyson Dietrich for a 68-yard touchdown toss, closing the gap to 33-27 as the quarter closed.

The E. Wyse-Dietrich connection was the secondlongest touchdown pass in school playoff history. A Layne Thrasher-to-Tom Winzeler toss of 71 yards in 1988 against Monroeville holds the record.

After a 17-yard pickup, Lambert raced for 15 more yards and a first down.

“Jay (Banyasz) just has a burning desire to win football games,” said Ward. “He wants the ball in his hands, and I am happy to give it to him.”

Banyasz “is a real special player,” said Miller. He hurt us running and throwing. We didn’t have an answer for him.”

The Raiders forced the Streaks into a three-andout, and threatened to score again.

Taking the ball on its own 13-yard line, Columbia took more than three minutes off the clock but was forced to punt with 6:18 left.

Starting on the Archbold 30-yard line, E. Wyse connected with Lincoln Parsley but for negative 5 yards.

For only the second time in the contest, E. Wyse spotted Levi Wyse down the left side of the field, who snagged the pass and headed downfield in front of the Raider sideline.

Breaking tackle after tackle, L. Wyse had the Streaks in Raider territory with a 48-yard reception.

The Raiders did what they needed to do, picking up yardage and first downs.

Archbold stopped the clock with a pair of time-outs but the Columbia ground game chewed off the remaining minutes.

“We had opportunities in the first half where we could take the momentum and knock them down, and they battled back.

“In the second half the roles were kind of reversed, where they got out on top and we battled back.

“I just wish we would have had more time.”