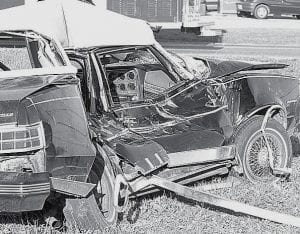 Two adults and two children were riding in this car when it collided with a garbage truck Tuesday, Sept. 18, at the intersection of Stryker St. and Co. Rd. 24. One adult and one child remained hospitalized yesterday. Andy Brodbeck, Archbold Fire Department chief, said this older car (a 1983 model) contains more steel than a modern, compact car. The steel protected the occupants, he said.- photo by David Pugh

Archbold Rescue utilized three helicopter ambulances to transport the victims of a Tuesday, Sept. 18 car-truck crash at the intersection of Stryker St. and Co. Rd. 24.

Archbold Rescue was called to the crash scene about 4:55 pm, but two members were already on the scene.

Andy Brodbeck, Archbold Fire Department chief, said Rod Cheney, an off-duty paramedic assigned to ALS-1, was preparing to put gas in a vehicle at the nearby gas station, when he saw the crash.

Ned Wyse, an AFD lieutenant, lives in the first house west of the crash site.

Before Archbold Rescue ambulances and equipment arrived on the scene, Cheney and Wyse had already done an initial assessment of the situation.

The Archbold Police Department report states a car, driven by Michelle Muniz, 23, Defi- ance, was traveling north on Co. Rd. 24. Passengers in her car were San Juanita Muniz, 24, Defiance; Cody Enteman, 3, who has the same address as Michelle Muniz; and Mallysa Cerighen, 7, with the same address as San Juanita Muniz. Records related to the crash also give a spelling of “Cereghin” for the seven-year-old’s last name.

The report stated the Muniz auto stopped at the Stryker Street intersection, then drove into the intersection, where the two vehicles collided.

The truck struck the passenger side of the Muniz car, which was pushed off the road to the northwest. The driver side of the car struck a utility pole at the corner.

Both vehicles came to rest in the northwest corner of the intersection.

Brodbeck said Archbold Rescue immediately called for a helicopter ambulance, but the helicopter based at Fulton County airport was not available.

The closest available helicopter was Promedica, based at Defiance. It flew directly to the scene.

Brodbeck said as rescue workers continued assessing the victims, it was decided a second helicopter was needed, so a Life Flight helicopter was summoned from the Toledo area. It, too, flew directly to the crash scene.

Brodbeck said some of the crash victims were extricated from the wreckage.

“We used a set of jaws (Jaws of Life hydraulic rescue tool). We were able to get the doors off the driver side, and extricate all that way,” he said.

Rescue workers called for a third Life Flight helicopter, but were told it would take about half an hour to get to the crash scene.

Brodbeck said in order to save time, that victim was taken by Archbold ground ambulance to Fulton County Health Center. Rescue workers called for the third helicopter to meet them there.

Archbold Rescue transported Michelle Muniz to Archbold Hospital, where she was treated and released.

San Juanita Muniz was taken to Toledo Hospital, where, as of Monday, she was in intensive care.

Enteman was taken to FCHC, then flown to Toledo Hospital. He has been discharged.

Cereghen was flown by Promedica air directly to Toledo Hospital, where she, too, is still a patient.

Thom Ross, Archbold Police assistant chief, said as of Monday, no charges had been filed. The crash remains under investigation.- David Pugh