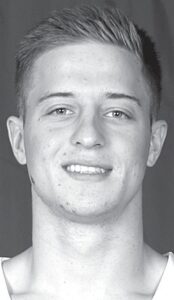 Bryce Williams, AHS ‘18, son of Doug and Vicki, is one of three members of the Trine University (Angola, Ind.) men’s basketball team named to the National Association of Basketball Coaches 2020-21 NABC Honors Court.

In order to be named to the Honors Court, a student-athlete must meet a high standard of academic criteria. The qualifications:

1. Academically a junior or senior and a varsity player.

2. Cumulative grade point average of 3.2 or higher at the conclusion of the 2020-21 academic year.

3. Students must have matriculated at least one year at their current institution.

4. Member of a NCAA Div. I, II, III, or NAIA Div. I institution with a NABC member coach.

Williams, a junior, was also named to the Honors Court as a business major. Williams averaged 10.6 points per game in the 2020- 21 season and shot 45.5% from beyond the arc, good for third in the Michigan Intercollegiate Athletic Association.

Williams knocked down six shots from “three” en route to a career-high 19 points at Olivet (Mich.) College on Feb. 13.