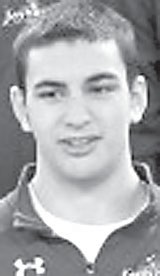 A freshman at Muskegon (Mich.) Community College, he advances to the NJCAA National Championship in Council Bluffs, Iowa, on Friday, Feb. 26.

Chandler Stevens, AHS ‘11, who bowls for the University of Northwestern Ohio, was named Bowler of the Year (highest league average) and was also named First Team All-Conference in the Wolverine-Hoosier Athletic Conference for the 2015-16 season.

He is the son of Mary Austin, Archbold.