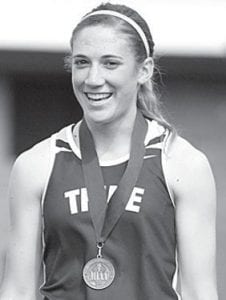 Trisha King, AHS ‘11, picked up Trine University’s only win while setting a school record in the 400-meter race at the 121st annual Michigan Intercollegiate Athletic Association’s Field Day, Saturday, May 5.

King, daughter of Pete and Luana, broke her own school record, finishing in 58.75 seconds to win the event by more than half a second.