by D. J. Neuenschwander Special to the Buckeye 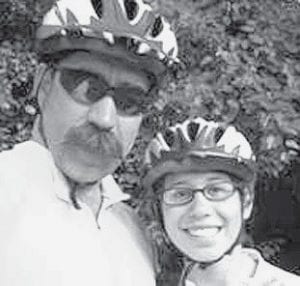 Rob Nofziger and his daughter, Rebekah, wearing their bicycle helmets. The pair decided to ride their bikes to Eastern Mennonite University in Harrisonburg, Va., as a last father-daughter trip before Rebekah started college. – courtesy photo

Many parents treasure the last days with a child who is about to leave for college, particularly when the college is more than 500 miles away.

Rob Nofziger had a plan to make those last days so memorable that neither he, nor college bound daughter Rebekah, will forget them.

Rob and Rebekah, who live a couple of miles east of Pettisville, decided to make the 535- mile trip to Eastern Mennonite University in Harrisonburg, Va., a special father-daughter time. The two of them traveled together- on bicycles.

The trip took six and a half days- a total of 45 hours spent on their bikes. The first day, when much of the trip was in relatively flat Ohio, they covered 140 miles. The remainder of the trip averaged 70 miles a day.

Father and daughter were somewhat experienced at bicycle riding, since both used their bikes to commute to work all summer.

Rob rides to Wauseon to work; Rebekah rode 14 miles round trip to work in Archbold.

“I sometimes put in 30 miles in a day, riding to work, to Bible study, and then to Wauseon for some errand,” Rebekah said.

Up To The Challenge

When her dad came up with the idea for the long bike ride, Rebekah was quick to agree.

Rob did most of the planning, choosing the route. Both knew the trip would mean riding through mountain areas, but they were looking forward to the challenge.

“When we got into the mountains and we started climbing, we could only go about four miles an hour,” Rob said.

“Climbing one mountain took us several hours. But when we got to the top- the view was amazing.”

Rob admitted that he was more nervous going down the mountains than going up.

“Since I am heavier, I would go faster downhill than Rebekah, and it was the only time we would get out of sight of each other. I would wait at the bottom, and I was always nervous until she came around a curve and back in sight.”

Traffic was always a concern. Most of the highways had paved shoulders, so they had places to ride that were not directly in the traffic lanes.

There were no accidents, but at times traffic worried them.

“One time I was going down a mountain, traveling 35 to 40 miles per hour,” Rebekah said.

“That was the speed limit on that road, but a car still pulled out to pass me. There was oncoming traffic, and I had to try and slow down to let the car get around me.”

According to Rob, the trip helped him appreciate drivers in Northwest Ohio.

“I ride to work on some fairly busy roads… Co. Rd. D and St. Rt. 108,” he said. “But the drivers are always respectful. They slow down and give me room. That was not always the case on this trip.”

The Nofzigers had to carry what they needed on their bikes, including food, water, and camping gear. They usually started riding around 8:30 am, and stopped by 8 pm.

They practiced what they call “stealth camping.”

“We found places to set up our tent that were out of sight and secluded, but not far off the route we were riding,” Rob said.

“We cooked over an alcohol stove, didn’t start fires, and left the places exactly like we found them, so no harm was done.”

Once or twice a day, they would stop and get something to eat in a restaurant or fast food place, but they preferred the meals they cooked themselves, like rice, beans, and even spaghetti.

During the entire six-and-ahalf day trip, neither Rob nor Rebekah took a shower, so they really appreciated it when they reached their destination and were able to finally take a nice hot shower.

The Nofzigers like riding bikes because it fits in with their personal philosophy of life. Rob said using bikes for personal transportation on trips under 10 miles uses less resources, and provides physical exercise.

“Short trips are hard on vehicles, and use more fuel because cars are less efficient on those short runs,” he said.

“Using a bicycle to commute to work and on short errands just makes sense.”

But why ride to Virginia?

“Well, my daughter was leaving, and this was a chance to spend time with her,” Rob said.

“And we thought it would be really fun.”

Going to college has not lessened Rebekah’s interest in bike riding. She joined a bike group at college, and goes on rides with the group on some weekends.

Would she consider going on another long bike ride with her dad if he suggested it?

“Most definitely,” she said. “I would love to.”