Coach Of The Year 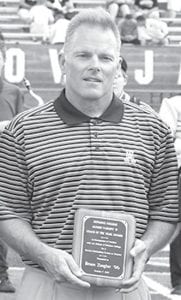 Brian Ziegler, head coach of the Archbold girls basketball team, was one of two Defiance College alumni recognized as a 2017 Coach of the Year during Homecoming festivities, Saturday, Oct. 7. Ziegler, DC ‘96, led the Blue Streaks to five district titles over the past six years. The Blue Streaks were 26-2 in 2016-17, which included a 20-game win streak that set a school record for the most wins in a season. He and his wife, Tobi, live in Archbold with their daughter, Alyssa.– courtesy photo