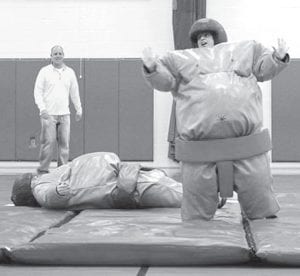 Dorothy Lambert, Archbold elementary principal, raises her arms in victory after defeating Aaron Rex, superintendent, in “sumo suit” wrestling, part of a “Clobber Cancer” event, Tuesday, Jan. 16. Students also had the chance to throw balls at their principal while she was wearing her suit. The event was a fundraiser for the ABC 4 Maddy Foundation, which donates money to fight childhood cancer and funds two scholarships each year for AHS graduates.– courtesy photo