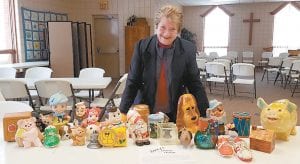 Bonnie Lauber, of St. Martin’s Lutheran Church, Archbold, with roughly a quarter of the more than 100 piggy banks that were left to the church by the late Jerry Clevenger. Clevenger and his wife, Patricia, also deceased, collected the banks for years. They were used in a church fundraiser.– photo by Pam Graber

Jerry Clevenger, Archbold, died in an accident in July 2018.

But the legacy he left behind, including a fundraiser utilizing some of his prized possessions, is still making a difference for St. Martin’s Lutheran Church.

“He was a veteran and a widower and had no family to speak of. St. Martin’s was his family.”

Clevenger’s estate was split between Fairlawn Haven Care Center (which cared for his late wife) and St. Martin’s. St. Martin’s also received the contents of his house.

“The cleaning-out process of Jerry’s house took a while,” Reichert said.

“One of the things that we had to get out of the house as we’re trying to get it ready for sale, was, there were more than 100 (piggy) banks on shelves.

“There was a shelf that went all the way around the living room and it was full of banks. They were all over the place. Jerry and his wife had collected them over the years. They had lived in that house for quite a long time.”

“We started packing them up, and one of the times when Bonnie (Lauber) was there, she offered to take them home and clean them.”

“We were thinking ‘garage sale’ at that time. Things were dusty and dirty, and while she was cleaning them, this idea came to her,” Reichert said.

“Actually, I didn’t want the banks to be thrown away,” Lauber said.

“There were 110 banks that I cleaned. There were no duplicates! That was so amazing to me,” she said.

“I was trying to come up with some way they could be used. Finally, when I was cleaning them, I went, ‘change for change.’”

Called “Jerry’s Change for Change,” the initiative asked congregants to take one of the piggy banks home and save their change over the summer. At the end of the summer, the banks would be returned to the church and the money used for a church project.

Lauber ran the idea past some of her friends, and they thought it was a good one, so she took it to Reichert.

“I got them cleaned and approached pastor” about her idea, Lauber said.

Reichert was in favor.

“We wanted it to be a defined project. This happened in conjunction with our basement renovation,” Reichert said. “This was the first renovation that had been done in the basement since 1966 when the church was expanded.”

The banks were displayed on tables in the church fellowship hall in May.

“I was surprised! 64 banks disappeared that first Sunday,” Lauber said.

“It was amazing how many people grabbed these banks!”

The day the banks were returned was Sunday, Sept. 8, the annual Rally Day for the church.

“Jerry’s estate helped significantly toward that project, and this was another way to get people involved and help them to remember Jerry and the difference he made in this community.”

“They were short $1,000 for the basement (renovation), and in the 37 banks that came back, we had made $1,100,” Lauber said. “This is how God worked through us! We ended up with just enough to finish our goal for the basement project.”

And it gave the congregation a way to remember, and be thankful for, a member who had meant much to them.

Senior Center NoticeVirus Doesn’t Stop FeastWhat Are You Thankful For This Thanksgiving?