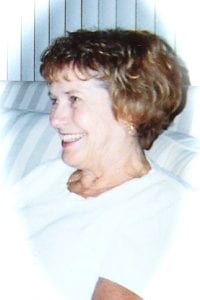 Claudette Snyder-Dion was born on April 22, 1935 at home in rural Pettisville, and passed away on April 23, 2013, after battling an aggressive cancer this past year.
She was a daughter of Claude V. Rupp and Helen (Wyse) Rupp.
She graduated from Pettisville High School in1953, then from Northwestern Ohio Practical Nurse Training Center, Toledo.
She was a Family Birth Center nurse at the Detwiler Memorial Hospital in Wauseon, Ohio from the mid 1950s-mid 1960s.
On June 16, 1956, Claudette married Howard J. Snyder in Wauseon. They were married for 38 years.
Together they operated H&S Body Shop and Howard Snyder Trucking.
Howard passed away on June 10, 1994.
After his death, she moved to Devil’s Lake, Mich., where she lived for several years before moving to Clearwater, Fla. While there, she met Robert Dion, and they were married on Nov. 20, 2004.
During the fall of 2010 they moved back to Ohio and resided near Archbold.
After retirement, Claudette enjoyed volunteering for Hospice in Clearwater and also NW Ohio and was very dedicated to the activities at the St. James Lutheran Church.
She is survived by her husband, Robert; children, Mary E. Snyder (Ellie Jones) of Sacramento, Calif., Joseph (Joe) H. Snyder (Lee Ann) of Perrysburg; a sister, Loretta (Stephen) Brannan; and a brother, Jerry L. Rupp.
She was preceded in death by her husband, Howard Snyder; parents Claude and Helen Rupp; and brother Allen L. Rupp.
Visitation will be held from 2 p.m. until 8 p.m. on Friday, April 26, 2013, at the Grisier Funeral Home in Archbold.
Funeral services will be held at 10 a.m., Saturday, April 27, 2013, at St. James Lutheran Church in Burlington, with the Rev. James Strawn, officiating. Interment will follow in the Pettisville Cemetery.
The family requests that memorial contributions be given to Hospice of Williams and Fulton Counties.
Online condolences may be offered to the family at www.grisierfh.com.-Posted 4.24, 10:50 am