Classmates Find Their Children Are Classmates 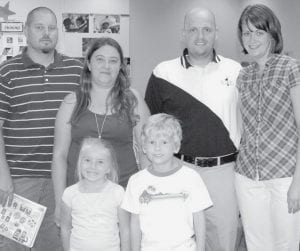 Adriana Thompson and Levi Baus were exploring their kindergarten classroom during the Monday, Aug. 18 Archbold Elementary School Open House with their parents, Todd and Kelly Thompson and Chad and Beth Baus, back row from left. The children are in Mrs. Warner’s class. Todd, Kelly, and Chad graduated together from Archbold High School in 1990; their children are members of the AHS Class of 2021.- photo by Mary Huber

Adriana Thompson, 5, and Levi Baus, 6, may not fully understand it, but when they stepped into Kris Warner’s kindergarten class this year, they’re carrying on a tradition of sorts.

Adriana’s parents, Todd and Kelly (Hicks) Thompson, and Chad Baus are Archbold natives who went to school together. All three graduated from Archbold High School, members of the Class of 1990.

Kelly said Chad was in some of her classes, and some of Todd’s. Chad remembers he was in second grade when he first had Todd as a classmate.

Kelly and Chad said the three weren’t particularly close friends, but in a class the size of Archbold’s, everybody knows everybody.

However, Chad said, “It felt like our senior year, everyone melded together. It seemed like we were one big group of friends.”

When it came time to put Adriana and Levi in school, Kelly said she had seen Levi’s name on the kindergarten class list.

Chad said he had seen and talked to the Thompsons, and remembered them walking with a stroller, but didn’t realize their children would be in the same kindergarten class.

Kelly said she hadn’t thought about their kids being together, “but it is kind of cool.”

After graduation, Chad went to college in Indiana for four years, then moved to Nashville in 1994.

He and Beth have two sons; their eldest is Daniel, 7.

Kelly said she and Todd dated for a while, then were engaged for a long time before marrying in 2001.

They lived in Defiance and Bryan, but “always come back to Archbold.”

Adriana is their only child.

Kelly said they run into other members of the Class of 1990. Recently they ran into Jake Grime, she said.

Chad said he, too, runs into old classmates, but since he was away for a few years, “I didn’t know who had stayed, and who had not. It’s taken a while to figure it out.”