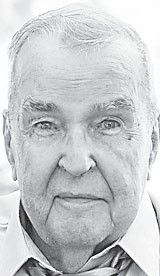 Clarence “Babe” Bernath, 87, passed away in Archbold on April 29, 2017. He went to heaven with his family by his side after a brief illness.

A lifelong resident of Archbold, Babe worked a variety of different maintenance and mechanic positions.

In his youth, he worked at the Scott Theater, later for Wyse Turkey hatchery, Christy Motors, and several other positions, including owning a gas station where the Pop Shop now resides.

He served in the United States Army following the Second World War.

Preceding him in death were his parents; four brothers, Lawrence, Eugene, Paul, and Olen; one sister, Pauline Langford.

In high school, he was the captain of the basketball team and played baseball. His yearbook described him as “tall, dark and handsome.”

As an adult, he played softball and had many hobbies. He enjoyed carpentry, working on automobiles, attending auctions and playing cards.

He was a devoted husband, father and grandfather. He attended his grandchildren’s baseball and softball games, as well as their tennis matches.

Visitation at Short’s Funeral home in Archbold will be held Thursday, May 4, from 9-11 a.m., with a service immediately following. Interment with military rites will follow in the Archbold Cemetery. www.ShortFuneralHome.com.