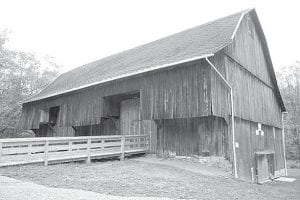 After more than $250,000 in repairs and renovations, the Goll Homestead barn is ready for visitors. It is assumed the barn was built around 1865, and reflects the style of European barns of the period. Note the new ramps leading into the structure.–photo by David Pugh

The Goll Barn, believed to have been originally built around the end of the Civil War, opens for public tours with kick-off festivities, Saturday, Oct. 9, from 1-4 p.m.

The day’s highlights are barn tours guided by Ted Ligibel, historic preservation expert, and a nature walk through Goll Woods.

The unique Goll Barn is a living history book “that will tell the story of the early settlers in this area,” said Debbie David, a member of the Friends of Goll Homestead.

The non-profit organization headed the efforts to preserve the Goll house and barn.

The barn and its homestead are located in the Goll Woods State Nature Preserve on Co. Rd. 26, northwest of Archbold.

Historic Treasure
“In Our Own Backyard”

The Goll Barn is creating quite a splash.

“It’s of national signifi- cance and it’s in our own backyard,” said David.

“Barn enthusiasts and preservation experts have been just awestruck by the unique nature of it.”

“This (barn) has a little bit of French twist to it,” said Steve Sauder, another FOGH member. It’s a triple-jettied outshot barn very similar to one that French settlers may have had on their European farms.

The French aspects of the barn reflect the heritage of the early settlers of the area, many of whom were from Alsace Lorraine, a section of Germany bordering France and heavily influenced by French culture.

It’s something, said David, “to come out to see.”

The barn’s owners have made changes to it since it was originally built around 1865.

The Friends of Goll Homestead took advantage of this to display the history of agricultural technology over the past century and a half.

“It really shows a walk through time as farming techniques changed,” said Sauder.

For example, visitors will learn that the roof was modifi ed from the angled gable roof to the gambrel roof, the traditional barn roofline with two slopes on each side.

When the Friends of Goll Homestead formed and intervened in the Goll Barn’s future in 2001, the barn was already collapsing on one side, said David.

“There were major structural issues,” she said.

But “the key aspects of the barn were so well preserved already, I think that’s what added enthusiasm.”

Today, the house and barn are structurally stabilized. The barn has been painted, and its basement is dry.

David said after the inside of the house is finished in about two years, it will be an educational center about Goll Woods and the Goll family history.

Because the Friends of Goll Homestead is volunteer run, the Goll Barn can be open only on selected occasions when the site can be monitored.

“It would be wonderful if there were volunteers that could man it on a regular basis, but at this juncture our plan is just for select dates,” said David.

David said the barn preservation was a $260,000 project. The state capital budget contributed $250,000 in grants, and individuals donated the remaining funds.

The Bryan Area Foundation gave $20,000 to support preservation of the house.

On opening day, Ligibel, a historic preservation professor from Eastern Michigan University who has been instrumental in the Goll Barn efforts, will explain the barn’s history.

Ligibel and several groups of graduate students did field research at Goll Barn. One of his students got the barn added to the National Registry of Historic Places.

The 3 pm nature walk will showcase Goll Woods, one of the least disturbed woodlands known to remain in extreme northwestern Ohio.

The walk begins at the head of trails by the parking area on Co. Rd. 26.


More From News Go To The News Section