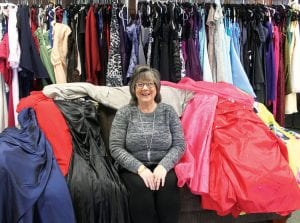 Lori King, of West Clinton Mennonite Church, with a few of almost 1,500 prom and other dresses she will offer at the “Beauty Comes from the Heart” event. There will be wedding dresses, short dresses, and everything in between, in sizes 0-26.– photo by David Pugh

Six times a year, the West Clinton Mennonite Church fellowship hall is transformed by Lori King and her helpers into a dress boutique.

King, a mother of three sons, never bought a prom dress for a daughter, but Friday and Saturday, Feb. 8-9, she will host her seventh “Beauty Comes from the Heart” event.

“I honestly don’t know (how it started). It was a whisper in the middle of the night about doing something for beauty for girls,” King said.

“It’s amazing what it’s expanded to!”

A friend of King’s suggested checking with Central Mennonite about getting the dresses left from their dress ministry, which had closed.

With an 80-dress inventory, King opened for business with the attitude, “If even one girl finds a dress, I’ll be happy.”

The first year, in 2013, 15 girls showed up at the afterschool event one afternoon, and 12 dresses went out the door.

A total of 809 dresses were taken last year.

“It’s grown like crazy from that first afternoon event to now,” King said.

“I open up eight times a year,” she said. “February is always the first big open house for prom dresses.

“I open up twice more before prom, usually once in March and once in April. Then I’ll open in September– short dresses only– for Homecoming.

“The first year I did this event, all the dresses were long. The second year we expanded to a two-day event, and I added shoes and purses to the inventory.

“The third year, I added ‘A Tie for Your Guy’ and jewelry. The ties have really been going!

“I started out with about four tubs of them and I’m down to just under two tubs. Girls will come in and choose their dress, and then they go and choose a tie that matches for their guy to wear.”

Everything at “Beauty Comes from the Heart” is offered by donation only.

“If they can’t donate, it’s free,” King said. “Most try to give something, even if it’s a bit of change.”

“A lot of the dresses are donated,” King said.

“I also visit Goodwill stores and Salvation Army stores in any city that I travel to.

“I’ve gotten dresses in Florida, Indiana, Michigan, Eastern Ohio, Pennsylvania, Kentucky and West Virginia. Those are the main states I get to.”

King meets with ladies throughout the year, and their dress needs are varied. In addition to prom and Homecoming, dresses have been found for weddings, funerals, cruises, pageants, daddy-daughter dances, and a military ball.

This year’s event features an expanded “Bridal Boutique,” including 30 wedding dresses– 27 of which are brand new with tags.

There are also mother of the bride or groom dresses, and mens dress shirts.

“This past December, I was contacted by someone that wondered if I took wedding dresses,” King said.

“I said yes, I would take them, not knowing how many dresses she actually had.

“We met, and the lady says, ‘I hope you have room in your van. My trunk and backseat are full of wedding dresses.’ They’re unsold stock from a bridal boutique.

“I’m driving home, looking in the mirror, and all I see is tulle and lace in the back.”

“Many times, it’s like the dress was made specifically for the lady who chooses it. One year, a stepmom contacted me just before Homecoming. Her daughter had missed my Homecoming event, and she asked if they could look.

“When I went to the appointment, I took a dress from home that I forgot to put out at the main event. That was the dress the girl chose!

“Another time, I was contacted by someone who needed a wedding dress for a renewal of vows the following Saturday. I didn’t have her size, but I put out the message on social media.

“A lady messaged me back that she had a dress. It had been in a box for 12 years. I took it out of the box, the woman tried it on, and it fit like it was made for her.

“God is truly the seamstress in this whole ministry, because He sends the people for the dresses to fit.”

A month and a half after her oldest son, Jake, was killed in a 2016 car accident, King was invited by 12 of his friends to join them for supper at a local restaurant.

The young ladies brought 86 long and short dresses to donate in memory of Jake.

“My van was full of dresses that day!” King said.

“A lot of theirs went just a couple of weeks later when I opened the February event. They gave me shoes, dresses and jewelry that night.

“I really think, with losing Jake, this has helped me in my grief journey.

“I can come to church and work with the dresses, and I feel such peace there.”