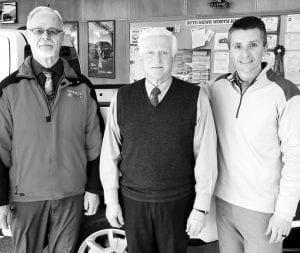 Christy Motor Sales, an iconic Archbold auto dealership for decades, has been sold to a man who is a thirdgeneration car dealer.

“The Christy name has a great reputation,” Winkle said.

“I haven’t talked to anybody, whether it be from Archbold, from Continental, or northwest Ohio in general, who has ever said anything negative about Christy– the name or the dealership.

“Christy has been part of Archbold… a long, long time. I don’t see any benefit to me or anybody else in changing the name.”

H&K was started in 1960 by Kenneth Winkle, Ryan’s grandfather, and another man.

The two owned the business together until the mid- 1970s, when the other man retired, leaving the dealership entirely in the Winkle family.

After Kenneth, Ryan’s father ran the business, and now, Ryan.

As a youth, Winkle said he washed cars in the summer, “worked in the parts department, just doing whatever. It’s all my family has ever done, going clear back to my grandpa.”

Winkle said he and Dunn “created a friendship over the past four to five years, through just business transactions our two stores have done, through dealer trades and otherwise, just normal car business stuff.

“It’s not uncommon. You have dealer friends; we trade inventory. It all started… through a mutual business friendship we had.

“And it just kind of progressed into, we had a conversation about Bill wanting to retire, and…here I am.”

Winkle said he was attracted to the Archbold dealership, or “store,” as he called it, because it “reminds me a lot of our store in Continental, in the sense of the way that it operates, the focus on customers, the small-town kind of atmosphere that it has. That’s the biggest reason.

“Continental has, like, 800 or 900 people in it, so we’re very, very customerfocused– you know, do a deal on a handshake type of mentality.

“We take time to get to know our customers, know their names, and their families.

“Just like this store, a lot of generations have bought vehicles from us.

Winkle said he will spend much of his time in Archbold.

His plans do not include radical changes in the staff.

“We might have to add people or current roles may change. I’ve been here all of a week and a half, and I haven’t thrown anybody out the front door yet.

“Everybody, top to bottom, has been here a very long time, and I respect what they know and what they’ve done. For people to stay somewhere this long, something’s right.”

While there won’t be major changes to the way the store operates, there will be some changes.

Winkle does not plan to make changes to the buildings.

The dealership, “the real estate of it, has got a lot of heritage to it,” he said.

“You don’t see stores like this anymore. There’s a lot of stores out there that are older and dated… but this store, to me… it’s got a unique old-school car dealership look to it.

“This is a good, solid store, with great people and a great customer base.

“There’s no reason to reinvent the wheel.”