Christmas Differs For Those Living Abroad 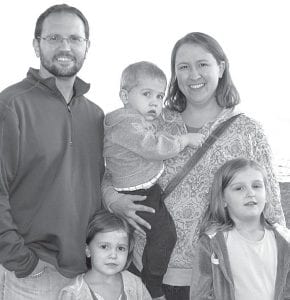 Christmas is celebrated around the world in many ways, but still celebrates the birth of Jesus. Top: the Morton family will celebrate Christmas in Albania this year, where they are performing missionary service. They are Kent and Angie (Schumacher), and their children Ethan, 2, Grace, lower left, 4, and Emily, 6. Bottom left: Chelsea (Rychener) Miller and her husband Stefan, work with a Christian Ministry in New Zealand. Bottom right: Dimitri Medoras, of Greece, was a former Pettisville High School exchange student. He and his wife Rose will celebrate the holiday in their homeland.– courtesy photos

Christmas trees, decorations, Santa Claus, and the celebration of the birth of Jesus are all parts of the season.

For those living in faraway lands, Christmas traditions are different, yet similar.

Chelsea (Rychener) Miller, a 2003 Archbold High School graduate, and her husband, Stefan, live in Tauranga, New Zealand, where they work with a Christian ministry.

“We’ve been living here two and a half years now, so this will be the third Christmas we’re celebrating in New Zealand,” she wrote in an email message.

“Christmas is very different here than in Ohio. New Zealand is in the Southern Hemisphere, so it’s the opposite season.

“Instead of cold and snowy, Christmas is all about hot, sunny days and barbecues at the beach.

“They do have a lot of the same Christmas traditions, decorations, etc. But with it being in the summer, it feels completely different than a Christmas I grew up knowing.” 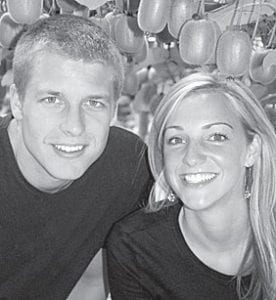 She is the daughter of Phil and Terri Rychener, Archbold.

“We decorate a tree like you do and exchange gifts,” he said.

Greece is located in southeastern Europe, with coastline along the Mediterranean Sea.

Dimitri reports, “Really, the only difference is, I’ll be wearing shorts, and we might go swimming.”

Christmas, celebrated in the traditional Greek fashion, might include caroling, done mostly by children, or small municipal bands or choirs. It might also include hanging a pomegranate over the front door.

Once the fruit dries, it is broken on the ground and stepped over with the right foot. The practice is said to bring good luck for the New Year. 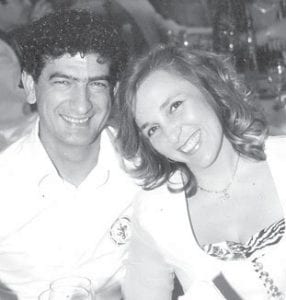 While at Pettisville, Mentoras lived with David and Sharon Sauder and their three children, Pam, Kent, and Anita.

He and his wife, Rose, have two sons, Kyriakos and Apostle.

Angie (Schumacher) Morton is a 1995 AHS graduate who will celebrate Christmas with her husband Kent, and their three children in Durres, Albania. She is the daughter of Gordon and Margaret Schumacher, Archbold.

Albania is another southeastern European country. It was once ruled by communism, and was considered one of the more restrictive and authoritarian nations in the Soviet block.

The Mortons moved to Albania early in 2009 to serve as missionaries.

“When Albania was a communist country, New Year’s was one of the few holidays that could be celebrated,” she said.

“Everyone put more emphasis on New Year’s than on Christmas.”

As Americans living in Albania, the Mortons have their Christmas tree decorated and their Advent calendar on the wall. They will attend a Christmas service at their church.

Their church has about 150 attendees. It is one of the largest evangelical churches in a city of more than 100,000.

“In Albanian, the word for Christmas is literally translated, ‘Christ’s birth,’” she said.

“As we wish people a ‘Gezuar Krishtlindjen,’ we are constantly reminded that this season is a celebration of when Jesus came to earth.”

While Christmas in far away lands may mean a day at the beach, it is still a celebration of the birth of Christ.–D.J.
Neuenschwander, Pam
Graber, David Pugh