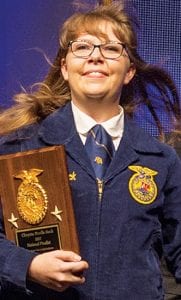 Chrysta Beck, rural Archbold, started raising chickens as a third grader, selling them to raise money to fund her participation in a competitive dance group.

While her career as a dancer didn’t pan out, it is her involvement with chickens that has given her her greatest successes.

Beck was named an FFA American Star in Agriscience for 2017.

“The chickens paid off, I guess,” she said in a recent telephone interview.

There are American Star awards in four areas. After applying to the program, a panel of judges selects 16 finalists from across the nation.

Then, during the FFA National Convention, held this year in Indianapolis, Ind., each candidate is interviewed by the judges before the selection is made.

Each year, only four people nationwide earn the honor.

Beck is part of that elite group.

She is not the only Pettisville High School and FFA alumnus to be so honored. Laura Bruner received the American Star in Agriscience award in 2008.

“For my project, all of my research has been based around broiler production,” she said.

Broilers are chickens raised for their meat, rather than eggs.

“I was looking at different parts of the production process that affects the broiler,” she said.

“Back in high school, I was looking a lot at how my birds in my personal business were performing, and the facilities I had available.

“Once I started doing my research, I became more interested in the poultry industry as a whole. So I started looking at broiler breeds and feed additives and things like that.”

A member of the Pettisville FFA chapter, she graduated in 2014 and went on to study at Mississippi State University.

“I chose Mississippi because I (looked at) the poultry science programs available in the United States, and Mississippi State was one of them,” she said. “The program is really strong.”

That makes sense, because the number one agricultural product in the state of Mississippi is poultry products.

The Mississippi Depart- ment of Agriculture & Commerce reported that during 2016, the state produced 773 million broiler chickens on 1,430 broiler farms. The state also produced about 1.4 billion eggs in 2016.

Plus, she said, “When I toured the campus, it felt like a good fit.”

As she continued her studies at the college level, she concentrated solely on the poultry industry as a whole.

“We are looking at incubation and in-egg injection of probiotics,” she said.

A press release from the FFA said Beck’s studies have been testing different types of bacteria to determine their viability.

Using “in ovo,” or “in-theegg” technology, a probiotic bacteria is injected into a developing chick embryo before the baby chick comes into contact with harmful bacteria in the outside environment.

This, the release said, allows the chick’s gut to contain beneficial bacteria when it hatches, rather than being subject to harmful bacteria after hatching.

“In theory, the harmful bacteria doesn’t have the opportunity to inhabit the broilers’ gastrointestinal tract, since a beneficial bacteria is already there,” she said in the FFA release.

“I want to help the bird from Day 1 to have an extra boost.”

A junior, Beck intends to pursue a master’s degree at MSU after graduation.

“And I’m looking at vet (veterinary) schools” after that,” she said.

She hasn’t made a final decision on where she will attend vet school.

“I’m still looking around and touring campuses,” she said. “I know I want to work in the poultry industry as an avian veterinarian.

“That limits my vet school choice just a little bit, but it’s still a forming plan.”

During the presentation of the American Star awards, Beck said she was on stage with 16 others.

“I knew I had a chance, but when you go up against three other people who have the top research projects in the National FFA organization, you know all four of you have worked very hard for your research and your interest,” she said.

“At that point, we all had an equal chance. We all put in a lot of time and a lot of energy into what we cared about.”

When her name was announced as the agriscience winner, “I was definitely surprised,” she said.

“It’s a really big award, and an important award for the FFA. So I was surprised but I was also honored to have earned the award.”