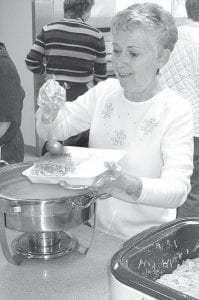 Chicken pie diners at the annual Ridgeville American Legion Post noontime feast may not know it, but they took part in an old tradition.

The dinner, held Sunday, Feb. 21, at the legion hall, dates back about 150 years, to Civil War days. And the recipe is unchanged.

Karen Keesbery, rural Ridgeville Corners, a member of the Legion Auxiliary, has been chairman of the dinner since 2000. She said it started during the Civil War to raise money for the Ridgeville Memorial Day celebration.

In 1925, the American Legion took over the dinner. Today, money goes to the Legion veterans homes, to send about six boys and girls to Buckeye Boys and Girls State, and other needs.

The chicken pie that’s served today follows exactly the same recipe, including the use of lard.

Lard is made from pig fat. It has fallen out of favor because of its high fatty acid and cholesterol content.

Keesbery said some have suggested changing the recipe to eliminate lard.

“They said, ‘We can’t use lard anymore,’ but I said, ‘We aren’t changing the recipe now. One Sunday a year, we can eat a little lard.’” It is special ordered, she said.

The pie’s crust is like a biscuit crust. Its basic ingredients are baking powder, flour, milk, and lard.

Keesbery said she took over responsibility of cooking the meal in 2001.

“The lady I took it over from was 82. She said, ‘Someone is going to have to learn how to do this, and I think it can be you.’

But Keesbery ended up with the job, “and I haven’t been able to get rid of it.”

Preparation of the meal starts on the Wednesday before the event.

“We start cleaning the chickens and turkeys. We mix some turkey meat in it, which gives it a better flavor,” she said.

On Thursday, “We get together, the men get their pressure cookers going, and we cook 900 pounds of chicken and turkey and pick it off the bone.

Attendance has not declined with the economy.

“Everybody comes, and everyone helps.”