To many people, honeybees are nothing more than tiny little insects that make honey and are capable of delivering a painful, and sometimes deadly, sting.

But honeybees face some serious challenges, especially from the hand of mankind.

Phil Lange, who lives near Ridgeville Corners, has kept bees for 28 years.

“My great-grandfather had them, and my dad had them,” he said.

“I didn’t pay much attention when Dad had them, but then later, I was asked to help a guy with his bees, and I was fascinated.

“One thing led to another, and I’ve been a beekeeper for 28 years.”

Honeybees are dying off, Lange said, for several reasons.

“Back in 1988, I was the bee inspector for Fulton and Henry counties when the first varroa mites were brought up to Defiance by a migratory bee keeper from Florida,” he said. 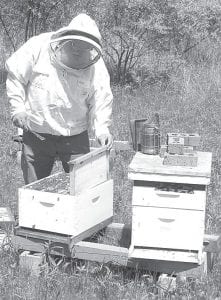 Phil Lange wears a protective jacket and hood while working with some of his bee colonies, or hives. Honeybees face challenges from several sources, including mites, viruses, and pesticides.– photo by David Pugh

“Back then, we had hard chemicals” to treat for the mites, he said. A few years went by, and the mites developed a resistance to one of the chemicals.

“They came out with another chemical, and by switching back and forth, we could keep the mites under control,” Lange said.

“Now, they have found the varroa mites have viruses. There are 25 different types of known viruses.

“One is the deformed wing virus. When the bee comes out of its cell, it can’t fly, and it lives a short life.

“If you see deformed wings, you know you have too high a varroa mite infestation, and the beehive is going to die.”

Today, doctors, professors and entomologists study more natural-type solutions to control varroa mites, and have come up with some solutions.

“You don’t stick a pesticide into a honeybee colony, when the bees are insects themselves,” he said.

Lange said another threat to the honeybee is a group of chemicals called neonicotinoids– chemicals farmers use as an insecticide when planting crops.

“It’s kind of a witch’s brew of chemicals that’s coated on the seed. One kernel of treated corn seed in a hive is enough to kill one million bees,” Lange said.

Neonicotinoids have been banned in Europe, he said, and Canada is developing a ban on the chemicals.

“I feel safe,” Lange said. His 25 colonies, or hives, are located a quarter to a halfmile away from where crops are planted.

Bees are used to pollinate plants.

“Over $3 billion in food crops and seed crops are pollinated in the United States for human consumption,” he said.

And in some places, bees are becoming harder and harder to find.

In California, when the almond trees were ready to be pollinated, there was a need for 2.7 million bees, but only about 2.5 million were available.

As a result, Lange said, “A lot of almond trees aren’t going to have almonds this year.”

Lange said in years past, he got $15 per hive to move his bees to a field to help with pollination.

In California this season, almond growers were paying $250 per hive.

Locally, pollination is not a big business. There are a few pickle growers left who need bees, and Rupp Seeds produces seed crops that need honeybees.

But nationally, the issue is a concern.

“You can’t go to the store and buy seeds for your garden without them having been pollinated sometime.”

Then there is Nosema, a disease of the honeybee’s stomach and intestines.

Nosema apis is a singlecell parasite that infects the honeybee.

Lately, a new strain, Nosema ceranae, has been found.

In 2010, Lange lost his entire bee population, a situation known in the bee world as CCD, or colony collapse disorder.

“My colonies had plenty of honey, but my bees were gone,” he said.

He went to Michigan State University and spoke to entomologists there.

“When I started, I could get 32 cents a pound for honey, wholesale.

Lange sells what’s called raw honey, which has not been pasteurized or highly filtered.

“I’ve had doctors send their patients to me for raw honey for coughs and allergies,” he said.

Lange said he’s planning to expand his operation, perhaps doubling the number of colonies he keeps.

His biggest concerns are pesticide issues. He is concerned pesticides may impact big beekeeping operations that sell bees.

And what about the person who just wants some honey for his biscuit?

You do need to be concerned, perhaps not immediately, but for future generations.