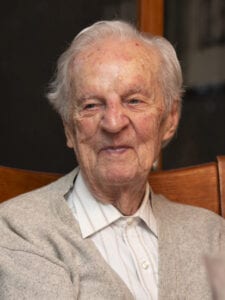 Charles was born on a farm two miles west of Archbold on July 18, 1921, the son of the late Joseph E. and the late Edna M. (Smart) Dominique.

He joined the Army during the month of February 1940. During the next five years he gained the rank of Captain and served in the European and Pacific Theaters of Operations. At the conclusion of the war he remained in the Army.

During the following 22 years he served in various European countries and throughout the Pacific area, including Vietnam. He obtained the rank of Colonel and for six years served in the Pentagon as a member of the Department of the Army General Staff and with a study group reporting to the Joint Chiefs of Staff. While serving his country, he served in World War II, the Korean War, and the Vietnam War.

Upon retirement from the Army, he became Executive Director of Communications and Computer Operations for the Illinois Central Railroad. He retired for a second time during 1985 and returned to Archbold after an absence of 45 years.

He was a member of the Veterans of Foreign Wars, the American Legion, the Military Officers Association of America and the Knights of Columbus.

In accordance with Charles’ wishes, there will be a private family burial in the Johnson Cemetery, near Archbold. In lieu of flowers, the family asks that memorial contributions be made to St. Peter Catholic Church or CHP – Defiance Area Inpatient Hospice. Online condolences may be offered to the family at www.grisierh.com. Grisier Funeral Home in Archbold has been entrusted with arrangements.–posted 8.1, 6:10 pm