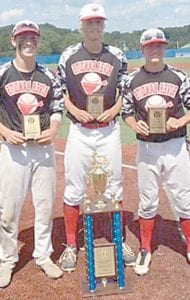 Ben Bucklew, AHS ‘16; Ian Radabaugh, AHS ‘17, and Toby Walker, AHS ‘17, from left, played for the Napoleon River Bandits this summer. The River Bandits won the American Legion state tournament in Lancaster, Sunday, July 30. They lost to Beverly/Lowell 4-3 in the first round of the double elimination state tournament, then worked their way back through the loser’s bracket, defeating Circleville 7-1, Steubenville 7-3, and Lancaster 5-0. Meeting up with Beverly/Lowell again for the championship, Napoleon won 13-3 and 8-0 to win the title.– courtesy photo