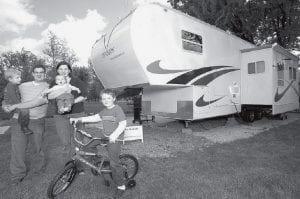 It’s so unique, it was written up in the August issue of Popular Mechanics magazine.

The camper is unique for more than just its electronics. Nicholls built it himself, from the frame up.

“I enjoy working on projects,” he said.

Nicholls, son of Chuck and Pat, Archbold, has pursued a career in information technology; in other words, computers and the Internet.

In high school, he learned how to write HTML, the computer language of the Internet. He attended Four County Career Center to study electronics, did an internship with Sauder Woodworking, and received an associate’s degree in computer science from Owens Community College. He then went to work for Sauder Woodworking for six years.

The Nicholls boys, inside the camper their father built. Note that each bunk has its own flatpanel TV, each with its own DVD player. Blaine, 3, is in his bunk; six-year-old Mason is on the ladder.- courtesy photo

Today, he is the IT director for Tri-State Expediting, Toledo.

“The thing is, I write (computer) code all day. I don’t get to stand back and see my work.

“When I work with my hands, I get to see what got done. I get to create something, as opposed to working at my desk.”

The camper project started as a frame manufactured by a company that went out of business. Nicholls said he happened to find it at a recreational ve- hicle parts surplus store.

He had worked on campers before, and understood their construction. Using parts from the surplus store, he built the camper himself.

“The hardest thing was finding all the parts,” he said.

When asked about the camper’s electronics package, he said, “I don’t know, it just grew and grew. Before I knew it, it had six flat screens.”

Nicholls and his wife Patricia, from Edgerton, have three children: Mason, 6, Blaine, 3, and Cora, 10 months.

They visit the camper often. When the weather is nice, the family is outside. But when the weather’s bad, they spend their time inside the unit. To keep the children occupied, each has his own flat screen with a digital video disc player.

There’s also a screen with a video projector built into the side of the unit. Saturday night is outdoor movie night.

“Sometimes, it’s our closest friends, or people we don’t even know.”

Nicholls said he always enjoyed working on a variety of projects. He said he will have three or four going at any one time.

But he’s not the kind of man who starts a project without finishing it.

“I get about 75% done, then I start something else. But then I come back around full circle, and finish it.”

His latest project is a 4,200 square-foot home in Northwood, suburban Toledo.

The couple bought five wooded acres. To clear a place for the house, he bought a skid-steer loader, and did it himself.

He hopes to have the house completed in October.

Popular Mechanics said Patricia told him “enough!” when he was working on the camper.

“That was a little over-exaggerated,” he said.

The correct quote was more like, “let’s just use it now.”