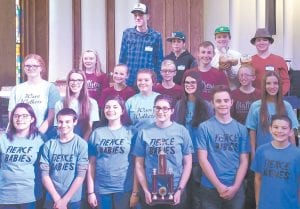 To open the third Bible Quiz meet of the season, Sunday, Jan. 27, North Clinton quizzers led the group in songs followed by a prayer by associate pastor, Dan Martin.

The first two rounds were devoted to mixed quizzing, where youths pulled names out of a hat to determine their new teammates.

In regular team matches, “Fierce Babies,” Central, quizzed the area’s other two top teams, undefeated “Wave Walkers,” Eastland Baptist, and “Huioi,” King’s Cross, who came into the day with their only loss being to “Wave Walkers.”

In the Central match with “Huioi,” siblings Kate and William Nofziger, sitting chair one on opposite teams, took six of the first seven questions to both quiz out.

By question 12, “Huioi” led 80-45 with another quiz-out by Levi Baus and a correct answer by Elijah Delgado.

“Fierce Babies” came storming back, with quiz-outs by Justice Beck and Lucia Rodriguez to take the match 105-90.

Going into the last match, “Fierce Babies” met “Wave Walkers,” now both 9-0. The match was back and forth with the score tied five times in the first 13 questions and the lead changing eight times throughout the match.

Central captured the fastpaced match 105-90 with quizouts by K. Nofziger, Rodriquez and Beck. Quizzing out for “Wave Walkers” were sisters Grace and Lydia Sheldon.

“Paralytic,” Pettisville Missionary, also had a strong day, averaging 109 points and winning three of its four matches, including a 105-70 win over “Huioi.”

Six quizzers– Levi Baus, Beck, K. and W. Nofziger, Rodriguez, and Hyatt Stamm– quizzed out in all four of their season matches, scoring 140.

Alissa Elliott, Levi and Samuel Myers, G. and L. Sheldon quizzed out in all three of their matches, scoring 105 points.

Quizzing out in three of their four matches and scoring 115 were Isaac Noor, Weston Ruffer, and Violet Thomas.

The second half of the double round robin starts Sunday afternoon, Feb. 3, at Tedrow Mennonite Church, and covers Matthew 18-21.