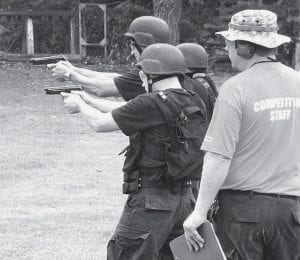 Members of the Corrections Center of Northwest Ohio Special Response Team, or SRT, compete in the firearms portion of the Ohio Tactical Competition. The event, for police and other law enforcement agencies, features five events, including firearms competitions and an obstacle course. CCNO won the overall title, earning the right to compete at the national level.- courtesy photo

The Special Response Team from the Corrections Center of Northwest Ohio was the overall winner in Friday, Sept. 12 Ohio Tactical Competition.

Jason Wisecup, a CCNO supervisor, won the top sniper award for the second year in a row. He won the event by twotenths of a second.

CCNO won the precision firearms portion of the competition.

This was the eighth year for the competition, which is hosted by CCNO. The Special Response Team has earned the right to represent Ohio at the national competition, held in Florida.