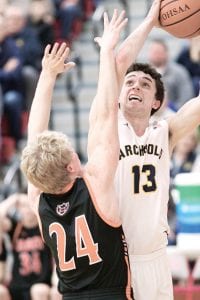 Coldwater’s Ben Wenning (24) gets his hands in the face of Archbold’s Austin Wiemken (13) early in their Div. III district semifinal. Wiemken battled foul trouble all night as the Cavaliers pulled off the 35-34 upset.– photo by Mary Huber

Then the Cavaliers turned right around and defeated the eighth-ranked Ottawa-Glandorf Titans 70-67 for the district championship, Saturday, March 9.

The Titans, who beat Bluffton 68-30 in their district semifinal, finished the season with a 21-4 record.

Grandview Heights plays Cardinal Stritch in the night’s first game at 6:15 pm. The Cardinals pulled off an upset of their own, beating fourth-ranked Genoa (24-1) in their district final.

“We went inside some. It looked like there was some contact on some shots where we got knocked down and no call, but at the end of the day, you’ve gotta play through that stuff.”

Archbold went on a 10-1 run to open the second half and tie the score at 23 with 3:07 left in the third. The third quarter ended with Coldwater leading 28-24.

At halftime, “we talked about making a few shots… and playing through some contact and fight through some adversity, and we did that,” said Frank.

“I knew we would answer the bell. This group’s done it all year long.

“We just said we wanted to try to cut the lead in half after the third quarter, and we did that.”

The Streaks continued their comeback in the fourth. After Coldwater’s Cole Frilling hit a basket to open the period, AHS went on a 10-0 run ending with a pair of Rigo Ramos free throws to hold a 34-30 lead with 1:35 remaining.

After some misses both from the field and at the foul line by both teams, Jacob Wenning hit a three-pointer with 13.8 seconds left to pull Coldwater within one, 34-33.

On Archbold’s ensuing inbounds, the ball bounced off Williams into the hands of Ben Wenning, who threw it to Frilling under the basket. The senior made the layup, giving Coldwater a 35-34 lead with nine seconds left.

Jeron Williams’ shot with time running out was off the mark, and Archbold suffered its first loss of the season at the worst possible time.

“I’d trade about five of those (wins) for this win tonight,” said Frank.

“Obviously it was a dream season for us. It hurts a lot right now, I’m not going to lie.

“It is a game. These kids went out and battled their butts off. We were a play short tonight.

“We did a whale of a job defensively. (Coldwater) had 22 at the half and ended up with 35, and five of those were in the last 30 seconds, so you do the math. They had seven points for about 15 minutes (in the second half).

“We gave ourselves every chance in the world.

“So unfortunately for us, that’s the end of the road.

“There’s no way of sugarcoating it other than the fact that we had a whale of a season but we let one get away tonight.

Frank said he expected Coldwater “to be physical with us, be aggressive, rebound the ball.”

“We knew (the multiple chances on rebounds) was going to be a potential issue. They’re big and strong, very athletic, and (if) you don’t get a body on them they’re going to get the ball. And they did.

“In spite of all those things, we still had the game within our grasp, and it just didn’t work out.”

“I want to give all the credit in the world to our seniors,” said Frank.

“They took this program and our team this year on quite a ride, and those seniors are going to be sorely missed. They played a lot of basketball to help us be as successful as we have been these last three years.

“They’re great kids, and hopefully when I look back on this… I’ll say these guys were a whole lot better people than they were basketball players, and if they are, then they’re pretty good people.

“Rigo (Ramos) and Jeron (Williams) played three years of varsity basketball. They made a lot of contributions to this team, and have received some accolades for that.

“But they’d say the same thing… it was about the team. They helped the team be very successful.

“AJ (Mahnke) was a firstyear starter, did all the dirty work, guarded people, made some big shots for us.

“Austin Wiemken– a twoyear starter, leading scorer, leading rebounder. Just a warrior. Gave away a lot of size in there.

“Andrew (Hogrefe) and Zig (Travis Ziegler) did some good things for us and were great leaders on and off the floor.

“Everybody played a role this year to help us be successful. All we can do is say we did our best, and tonight it wasn’t quite enough.”