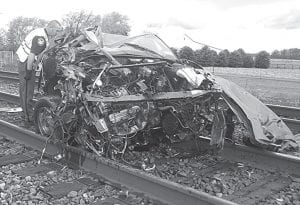 A car collided with a Norfolk Southern train about 2:51 pm, Tuesday, Oct. 26. The wreckage was pushed off the Co. Rd. 19 crossing to the west. Ohio State Highway Patrol troopers, Fulton County Sheriff deputies, and Wauseon rescue personnel were still on the scene at press-time, but early reports say one person was transported to the Fulton County Health Center as a result of the crash.–photo by David Pugh