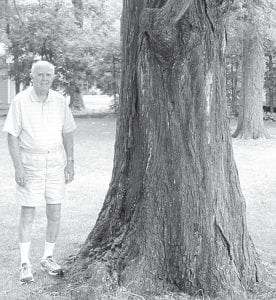 Top: Richard Harris, stands next to the trunk of the California redwood tree he planted almost four decades ago. Then, it was just six feet tall.

About 40 years ago, Richard Harris, former superintendent of the Archbold Area School District, was walking through a plant nursery, where he found three California redwood trees.

He bought one of the three.

Harris brought the sixfoot tall tree to his home at 3512 Westwood Dr., west of Archbold, and planted it.

Today, 3512 Westwood is owned by Les and Sherry Wyse, and that little six-foot tree stands at least 50 feet tall, with a trunk so big, a man can’t reach around it.

Harris thinks his California redwood may be the only tree of its kind in the area.

There’s another small grove of unusual trees on the property, called coffee trees.

“They make a pod with a bean that looks like a coffee bean, so the early settlers called them coffee trees. They actually brewed that bean, and made a drink from it,” he said.

“They’re very rare trees. There probably aren’t any more like them in northwest Ohio.” 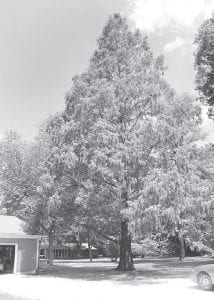 Right: The tree, which is now at least 50 feet tall, stands outside the home Harris once owned on Westwood Drive.– photos by David Pugh

At the time, there were no houses for sale in Archbold.

Tom Vitello, a teacher in the school district, was building the house on Westwood. Harris said he bought the house before it was finished.

He and his wife Delores moved their family from North Baltimore to Archbold.

Harris spends his summers in Continental.

He and a friend came to Archbold for the annual Carp Fest activities, and decided to check on the Redwood tree he planted “30- some years ago.”

Harris said when he planted the little tree about four decades ago, “I didn’t even know if it would grow, if it could take our climate.”

“Must be good ground,” Harris said.