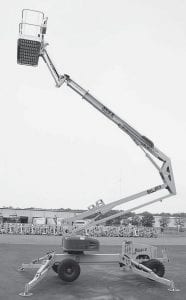 One of the two models of X-Boom aerial work platforms, manufactured in Archbold by Bil-Jax, stands partially extended. In the background are more platforms waiting delivery. The X-Boom fills a niche in the market like no other machine.- photo by David Pugh.

Say you want to paint the second story of a house or a barn, and you want to use an aerial work platform, or what some call a cherry picker.

A few years ago, you would have discovered that many of the machines available had big, heavy counterweights. They were so heavy, they would cut ruts into the lawn.

Now, Bil-Jax, a local company since 1946, has an answer. It’s the X-Boom, an aerial work platform mounted on a fourwheel drive chassis. It uses outriggers to steady it instead of the counterweight. It’s much lighter.

“You can drive it out on a golf course, and never know it was there,” said Brent Hagedorn, director of marketing and national accounts.

The X-Boom series is an outgrowth of the Summit series of lifts, that was towed behind a vehicle to the job site.

Tami Becher, marketing manager of the company, said the research and development department, also located in Archbold, began looking at what types of aerial platforms were available in the marketplace.

“We wanted to build something that was better than what was out there.

“There was definitely a need” for that type of machine, she said.

Research and development took about two years. In 2006, the first X-Boom model was shown at a 2006 convention of concrete contractors.

It wasn’t for sale, but there was enough interest in the machine to pursue the idea.

There was another year of R & D after that. The X-Boom was tested in different climates, and finally made its debut at a Las Vegas trade show. In one day, there were 10 orders.

Becher and Hagedorn said the Archbold factory turns out about five X-Boom aerial work platforms every day. So far, over a thousand have been manufactured.

The X-Boom is so popular, there’s about a six-month backlog of orders.

With the relative weakness of the U.S. dollar compared to other world currencies, Bil-Jax started exporting aerial work platforms around the world this year.

Some of the Bil-Jax aerial platforms have been shipped to China, reversing the usual trend of China sending manufactured goods to the United States.

“We’ve been able to support our best customers, and help their business grow,” Hagedorn said.

Bil-Jax’s business isn’t all aerial work platforms. The company makes other kinds of lifts, and it still manufactures the product the company started making in 1946- scaffolding. Scaffolding is still the major part of the company business.

In fact, Becher said the company manufactures a new scaffolding system, that can build a scaffold for a round structure, like the special tanks seen at refineries.

That’s not to say Bil-Jax doesn’t face challenges. Most of their products are made of steel, and Hagedorn said as of June 1, the price of steel is up 85% in a year.

But despite the skyrocketing price of steel, and the downturn in the economy, Bil-Jax is doing well.

“We laid out a very aggressive budget at the beginning of the year, and we’re about 2% ahead of budget,” Hagedorn said.

Originally started by Wilbur Wyse, Bil-Jax was eventually sold to a German firm.

Then, Hagedorn said the local management team, with the assistance of a capital investment firm, purchased the company. Then later, the managers bought out the investment firm.

Today, Bil-Jax is owned by the company executives.

It is privately held, and the owners live in Northwest Ohio.

That’s an advantage, Hagedorn said, because it allows decisions to be made faster.

On top of that, Bil-Jax gets many of the parts it needs from area contractors, providing jobs at those businesses as well.

Yet, with 350 employees, he said the workplace still feels like a family environment.

That’s born out by a relatively high number who’ve been with the company for many years.

“There truly is a lot of care for the employees,” he said.