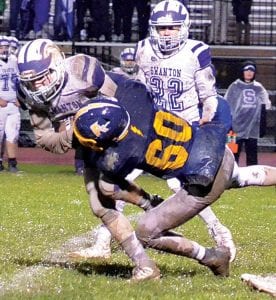 With the score tied 21-21 after regulation, the first overtime, the second overtime, and 27-27 after the third overtime, Swanton scored the winning touchdown in the fourth overtime to hand Archbold its first loss in the Northwest Ohio Athletic League, 33-27, Friday, Oct. 27, on a rain-soaked evening at AHS.

The Streaks (8-2, 6- 1 NWOAL) had already claimed the league title, but was playing for a favorable seed in the opening round of the Division V state playoffs.

It’s the first time AHS has made the playoffs since 2012, when the Streaks lost to Columbia Station 39-34 in the first round.

Swanton (7-3, 5-2 NWOAL) grabbed the last spot in the playoffs and will play topseeded Eastwood (10-0) in the opening round.

“Luckily for us we get another week so we can improve. The last time we lost a game we came back stronger. 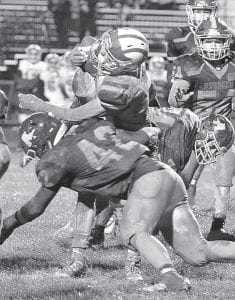 Blue Streak Izrael Reyes (42) tackles a Bulldog late in Archbold’s NWOAL contest with Swanton. A steady rain resulted in slippery and muddy conditions on the field, made worse by four overtimes.– photo by Mario Gomez

“We’ve got to get back to the grind.”

Swanton received the opening kickoff and fumbled on the third play, which Mason Babcock recovered to give AHS the ball at the Swanton 27-yard line.

Four plays later, Gabe Petersen scored from 1 yard out to give Archbold a 7-0 lead with 8:53 left in the first quarter.

Swanton was forced to punt on its next possession and gave Archbold the ball at its own 37.

Nine plays later, Nic Rodriguez hauled in a 15-yard touchdown pass from G. Petersen for a 13-0 lead after the point-after-touchdown kick was no good.

Swanton missed a 22-yard field goal on its next possession.

The rain continued to fall and caused field conditions to worsen as the first half ended with Archbold leading 13-0.

Archbold took the opening kick in the second half and ran three plays that netted only 6 yards, forcing a punt.

The snap went low past Kaiden Bedsole, who recovered the ball and tried to get the kick off. But the ball was blocked into the end zone and recovered by Gage Pachlhofer for a Swanton touchdown, cutting the difference to 13-6.

Both teams exchanged punts on the mud-covered field, and Archbold gave Swanton the break it needed when G. Petersen was inter- cepted at the Blue Streak 17.

Swanton needed only five plays to score on a 5-yard Pachlhofer run.

The Bulldogs went for the two-point conversion and scored on Michael Lawniczak’s run to take a 14-13 lead with 11:14 left.

It looked as if Swanton was putting the nail in the AHS coffin when Lawniczak scored on a 39-yard run for a 21-13 advantage with 2:03 left.

Archbold took the ball at its own 49 and drove to the Swanton 25 when G. Petersen connected with Rodriguez on a 25-yard touchdown pass to get within two points, 21- 19.

The pair hooked up for a successful two-point conversion pass to tie the game at 21 and force the game into overtime.

After both teams failed to score in the first and second overtimes, Swanton scored on a Lawniczak 4-yard run in the third OT, but was unsuccessful on a botched PAT run to lead 27-21.

Archbold answered with a Petersen-to-L.J. Tijerina 20- yard touchdown pass to tie the game.

The PAT failed and the two teams went into a fourth overtime.

Archbold took the ball first in the fourth OT, but was intercepted.

Swanton ran the ball effectively all night, and scored the game-winning touchdown on a Lawniczak 2-yard scamper.

“We just made too many mistakes, too many mental mistakes out there, and we couldn’t overcome at times,” said Dominique.

“We just couldn’t finish it.

“Coaches lose games and players win games is what I always say, so I’ll take the loss. You learn a lot about yourselves in losses.”

G. Petersen passed for 72 yards on 4-11 passing with three touchdowns and a pair of interceptions. He rushed for 88 yards on 28 carries with one touchdown.

Lawniczak rushed for 168 yards and Pachlhofer added 89 yards to carry the Bulldogs.