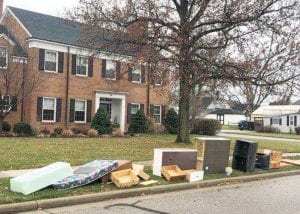 Two friends of Jeff Fryman, Archbold mayor, protested the elimination of unlimited trash pickup one day a month by dumping bulk items in Fryman’s front yard. Fryman told council he was embarrassed by the large pile of refuse on his lawn. People driving by took about one-third of the items; A.R.S. had to haul away the rest, Fryman said.– courtesy photo

After a large pile of trash was dumped in his front yard, Jeff Fryman, Archbold mayor, called for the village council utility committee to revisit unlimited trash pickup.

“I’m just asking to look at other alternatives,” he told council at its Monday, Jan. 7 meeting.

The move was part of a cost-saving measure to help the overextended village general fund.

Cutting unlimited pickup also avoided having both a water and wastewater service rate increase and an increase in refuse collection hit at the same time.

Fryman told council, “I have a couple of friends; they might as well be enemies.”

He said the two friends decided to protest the end of unlimited garbage pickup.

On the last day of unlimited pickup service, which was Friday, Dec. 21, for his residence, “They both emptied their garages out in my front yard, and stretched it from my driveway… all the way to the stop sign. They had that much stuff.

“Then people started stopping by and taking stuff, as they do.

“They whittled it down to about two-thirds. Then I went out there and tried piling it all up.

“I called A.R.S. (Archbold Refuse Service) and said, ‘This is not my stuff.’”

Fryman said he received a call saying someone was protesting, “but it was a ‘fake news’ protest.”

“We were going to do a police report and everything,” said Donna Dettling, village administrator.

“I had mattresses, I had furniture… I couldn’t wait for it to be gone because I was so embarrassed,” Fryman said.

“I didn’t have to work that day, but I went to work because I didn’t want to be home when they (A.R.S. crews) came and picked that up. So I drove to work, and I thought I had waited long enough.”

When he went home, “I came around the stop sign off Walnut and Ditto (streets), and as I’m turning the corner, the (A.R.S.) guys are picking it up and literally throwing it in the back of the truck, because you can just tell they’re hot because there’s all this stuff.

“I just drove right by my house. I did not turn in my driveway; I just kept going… I pulled down the alley behind my house and waited. Pretty soon, they were gone,” he said.

“The only thing I wanted to bring up was maybe to have utility committee research what the cost would be if we did it biyearly or something, one time a year, put a onetime cost or fee on your water bill for X amount of dol- lars for unlimited pickup,” he said.

Dettling said the committee had discussed biyearly pickups, but the concern was with the overall tonnage that has to be hauled away twice a year as opposed to being spread out over 12 months.

Council discussed other options such as a central collection point for trash, but took no action.

One problem discussed was people who live outside the village bringing their trash into the village and leaving it at a curb for pickup.

If a central collection point is established, “You would have to do the same thing we do for leaf collection (the drop-off site for leaves and grass clippings). Put a camera out there and watch” to keep out-of-town residents from using the facility.

During the discussion, Fryman, Dettling, and council said there was some confusion over what changed in garbage pickup.

Brad Short, a councilman and member of the utility committee, said there has been a perception that trash collection service has been ended completely, “and that’s not the case.”

Vaughn Bentz, a councilman, said the new rule allows pickup of two bulk items per month. The rest of the time, the four-bag trash limits apply.

Residents can contact ARS to arrange removal of bulk items and excess trash. There is a cost for that service.

Fryman said one of his neighbors “called me up and asked why we took away garbage service. We didn’t. It’s the same service, just no unlimited pickup.”

“We could still have unlimited, but it’s limited,” Short said.

“As the utility committee, we are all about looking at the whole big picture. If there’s a better way, we are absolutely open to it.

“We all hate taking away services. That’s not our goal or objective here.”

Fryman added, “The thing was, we raised everybody’s water bill and wastewater bill three years in a row, and nobody hardly says anything.

“Then you take away (unlimited) garbage, and they’re ready to string you up.”

The next meeting is Monday, Jan. 21, 7 pm, in council chambers.–David Pugh